Update.  The post below was published on 12 November. We would like to clarify that the farm where the cubs were collected was not the same farm where the cheetah mother was shot. In fact, this farm rescued the cubs from the other farm. We apologise for not explaining this important fact. The farmer that called CCF was in fact helping the cubs and we truly appreciate his involvement. The picture below was taken at the farm where the cubs were cared for while awaiting to be picked up by CCF staff. We are extremely thankful to the farmer who helped save the lives of these cubs that now roam free with their new adopted mother and siblings.
Last Monday, only two days before collaring Ombdillo, Anakin, Obi-wan and Chester for release, CCF collected three cheetah cubs trapped by a farmer near Hochfeld. They were trapped with their mother, but sadly she was shot by the farmer, leaving the young cubs as orphans at approximately four months old.
Once at CCF, the cubs were anaesthetised the following morning for a health check-up and sample collection by Laurie Marker, CCF veterinarian Dr. Gaby Flacke, veterinary nurse Rosie Glazier, cheetah husbandry team Juliette Erdstieck and Rachel Shairp, as well as several interns and two working guests.
The cubs, all males, had no trauma wounds, although they were quite thin from not having eaten for several days while in the trap. They were given vaccinations and treatments for de-worming and flea/tick prevention, as well as transponder microchips for identification purposes.
So far the cubs are doing fine and although they are very shy and scared, they are eating well and seem healthy. They will live at CCF and hopefully one day will be able to be released into the wild.

What happened with these cubs is exactly the type of situation that CCF aims to avoid through education and outreach programs to teach people that there are many ways to prevent and reduce predator conflict issues, other than shooting the predator. As it is customary, the CCF staff invited the farmer to learn more about predator-friendly farming tools.

In the meantime, we are excited about the release of the four collared males into the 4,000-ha training camp tomorrow. Stay tuned!

Posted by Cheetah News at 7:51 pm 3 comments: Links to this post 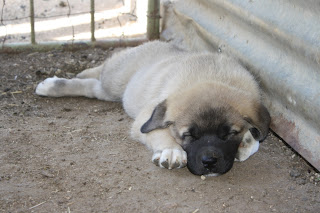 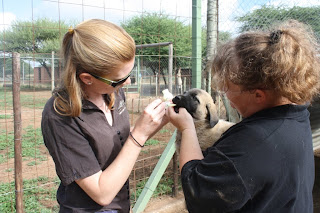 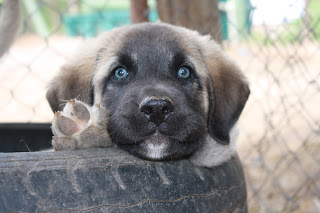 Uschi's puppies are now over seven weeks old and are getting very big and
developing their individual personalities. The puppies love running around
in the kraal and wrestling with each other. On hot days (it is summer in
Namibia) the puppies like to dig holes and lay in them to keep cool. They
are also in the process of teething and like to nibble on everything.

In the last couple of weeks the puppies have received their third and final
de-wormer while here at CCF. This final de-wormer will prevent against
internal parasites such as tapeworms and roundworms. This particular
de-wormer tastes like bananas which the puppies quite enjoyed. The puppies
have also received their second vaccination which prevents against
parainfluenza, canine distemper, and parvovirus. The puppies were so tired
from playing when Gaby gave their vaccination that they didn't even move.

Wishing you a Happy New Year!

Posted by Cheetah News at 11:46 pm No comments: Links to this post 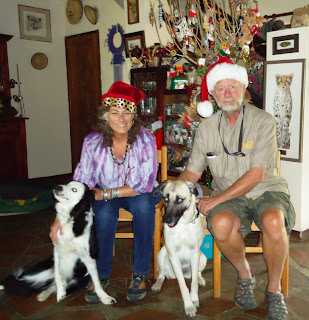 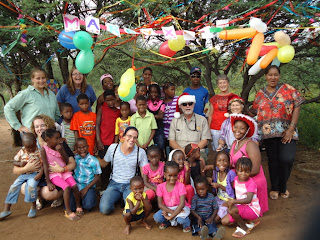 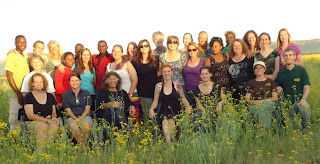 We hope you all had a very Merry Christmas and that you enjoyed your friends
and family. We had Christmas Eve dinner in the little Serengeti (big field –
attached is a photo of our group) with hamburgers that Bruce made. Then
yesterday we had Christmas brunch (one of our volunteer brought maple syrup
for our pancakes). We had a huge rain storm – dam filling rains and hail!
So, we all got wet.  We also went over to our farm workers' houses to wish
them a Merry Christmas and to join the kids' party where we delivered
watermelon for them (photo attached). Bruce was Father Christmas.

Many cheetah Purrs - and hope your holidays continue to be wonderful.

Posted by Cheetah News at 7:04 pm 2 comments: Links to this post 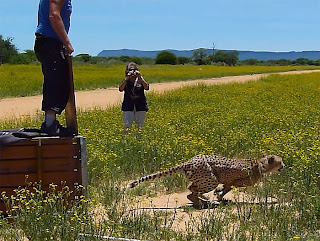 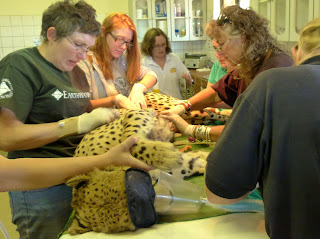 The wild female cheetah with her five cubs have been satellite tracked since
their release on 9 December. As of 20 December they had travelled 23 km from
their release site to the south of CCF property and onto our neighbour's
farm.

Our Earthwatch volunteers unfortunately finished up their two-week placement
last weekend. (On the photo, Earthwatch assists with cheetah collaring.) We
were sad to see them go, as they have been extremely helpful. They were busy
assisting with many aspects of the ecology department, including spotting
animals on our monthly game counts. Whilst on one of the field game count
earlier this month we saw a herd of eland grazing with their small calves.
We managed to snap a photo and count them all! Earthwatch also helped a lot
with our camera trapping. We were impressed to see a civet captured on one
of our camera traps, as they are usually very rare in this area.

We continue to radio track our resident male cheetah, Hi Fi, to monitor his
movements and spatial usage. However, we had not picked up a signal from him
for some time so we successful trapped him last week to fit him with a new
collar. Whilst anaesthetised, we gave him a health check and noticed that he
had quite a lot of ticks on him, so we spent over an hour picking them all
off! We then released him onto the airstrip (photo), where he proceeded to
run away. At first he turned around back to the crowd watching him, trotted
parallel to us and stopped to stare at us. He then made a run for it in the
opposite direction back into the safety of the bush.

The four male cheetahs that were in Bellebenno training camp have now been
moved back into smaller enclosures after a successful month of fending for
themselves. They are now ready to be released into the wild and Bellebenno
is vacant once more with plans for additional cheetahs to participate in
CCF's re-wilding programme sometime next year.

Best wishes to all for the Holidays!

On Friday we released the wild mom and her now five cubs (adopted and her
own) and they went out of their holding area fast.  We have a satellite
collar on mom and she is a couple of kilometres from where we released her
(her collar downloaded today). We will know more on her movements on
Wednesday. It is great, as the cubs bonded and she bonded to all of them, so
we feel really good about her release.

Also, the male cheetahs in Bellebenno caught a female kudu yesterday and are
moving more in the camp.  This is their sixth kill and we have not had to
feed them since the the few days.  We are very pleased with their progress.

All else going OK – had 40 mm of rain three days ago – sunny again now – but
our thatch roofs leak!

Posted by Cheetah News at 3:23 am No comments: Links to this post

Chester, one of the Bellebenno cheetah males currently participating in CCF’s re-wilding programme, was wounded a few days ago, so we took him out for treatment – he was bitten on his leg and foot and he needed antibiotics. He is about ready to go back out with the group. The males have been hunting very well – they caught a steenbok on Sunday and a warthog the day before – and they are moving around more, about 3 km per day.


Remember the cubs we got about two months ago, and the female with two cubs from the game farm we got more recently? All five cubs are about the same age, so for over a week I have been working daily to get the group together and make a new family, which has worked out very well. Yesterday we fitted the mom with a satellite collar and will work towards a release in the next couple days. We have been monitoring them via camera traps and it has been really exciting to see them all eating together.

Uschi’s puppies are walking around now, and the international course participants have all left -- they were a great group, just like the Earthwatch group who arrived on Sunday. Meanwhile, we have hosted several film crews. The last few days we had a TV crew from NBC TV Namibia linked to the Deutsche Welle, and then one from Africa TV that did a story about International Cheetah Day and interviewed our international course participants.
The course participants also got to take part in two work ups on two of CCF's resident cheetahs with dental problems: Solo, an 11-year old female who had an abscess associated with the root of one of her maxillary (upper) pre-molar teeth, and Padme, a 4-year old female with a broken upper canine.

For many of the participants this was the first time to witness a medical procedure with an immobilized wild carnivore, so it was not only helpful for the two animals to have their dental issues resolved, it was also a great learning opportunity for our course participants who were here from eight cheetah-range countries.
The dentist from Otjiwarongo, Dr. Dennis Profitt (who has worked upon many of CCF’s cheetahs over the years!) came to the CCF clinic to take care of both problems. Solo's abscess was surgically incised and she is now on antibiotics on her way to recovery. Padme had a root canal and can keep her very important upper canine tooth, an essential tooth for catching and holding prey when hunting in the wild. Thank you Dr. Profitt!

Cheetah purrs to all,
Laurie

Posted by Cheetah News at 8:51 am No comments: Links to this post