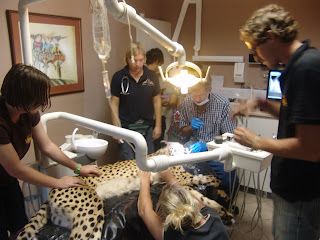 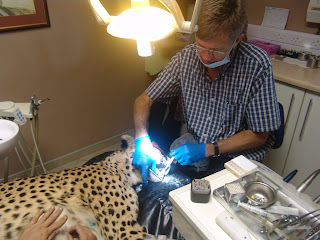 On 7 March, Amani the cheetah had her annual exam performed as well as having some extensive dental work due to several broken teeth.  She had a root canal performed on two canine (fang) teeth, and one premolar tooth.  Performing root canals instead of extracting these damaged teeth will allow Amani to continue to tear, hold, and chew the meat she is fed without problems.  Amani was also found to have a lesion on the cornea (surface) of the right eye.  A corneal lesion is generally caused by trauma, for example walking into something and getting a scratch on the eye, or a piece of grass or sand that gets into the eye and scratches the surface.  Infectious conditions can also cause eye ulcers in cats, including  Herpes virus and several different bacteria.  Amani’s corneal lesion will be treated with daily eye drops and monitoring closely.  She is also receiving several days of anti-inflammatory pain medication and antibiotics due to her root canals.  Otherwise Amani was in good condition and all parameters on her annual exam were within normal limits.  She recovered well from her procedures and was back to eating meat pieces by the next morning.