CCF has carried out a number of camera trapping surveys, and also maintains a network of cameras positioned for ongoing monitoring of the wildlife on our land.  While we are mainly focussed on cheetahs, there are many other species out there, and the cameras will trigger no matter what passes them by.  In this series of weekly blog entries, I will use these pictures to illustrate some of the wealth of animal life in Namibia - one species per week.  I hope you will enjoy seeing a little more of our world here in the bush. 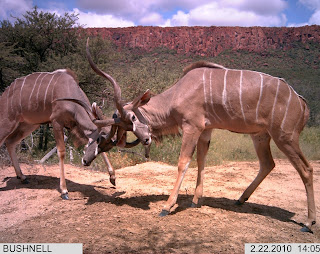 This week we have a magnificent giant, the Greater Kudu.  Standing up to 150cm at the shoulder and weighing in at 315kg, with males mounting horns of over a meter, this is one of our larger and most distinctive animals.  Kudu's can jump fences from a standing start, and have ears sensitive enough to hear our supposedly silent camera traps triggering. 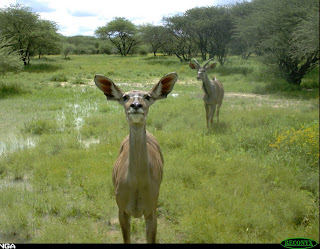 Listed as Least Concern by the IUCN, there are close to half a million greater kudu spread across 17 countries from Ethiopia and Chad in the north, down to South Africa. Nearly two-thirds of the population exists on private land, where it is highly valued as a trophy animal - indeed, without this demand the population today would undoubtedly be much lower. 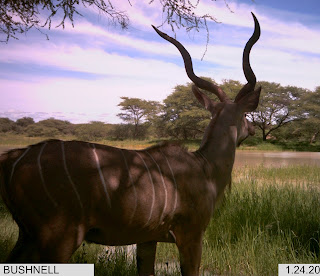 Kudus are browsers, and eat a considerable range including many herbs, fruits, succulents, and foliage, with acacia being a major staple. Providing their diet is sufficiently moist they have no need to visit waterholes for additional fluids, although in the parched environment at CCF, they are a frequent visitor at our dams. 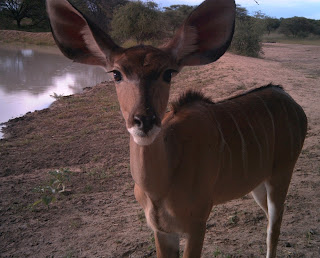 Over the last few years many of Namibia's kudu have succumbed to an ongoing rabies epidemic.  More research is needed on the topic, but it's believed they are particularly susceptible to spreading this disease because of the way multiple animals often chew on the same spiny branches of the acacias, thus passing the disease via their bloodied lips and tongues.  Numbers still appear to be high however, especially where populations are actively managed.
Posted by Cheetah Conservation Fund at 3:45 am