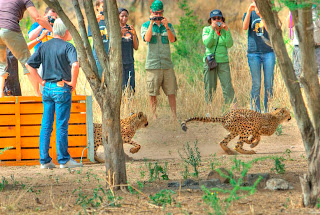 We just released the female that came in the week I got home a couple of
weeks ago.  She had two cubs about a year old.  She had a broken rear toe
and a broken canine tooth.  We had her toe amputated and took her to the
dentist.  She looked great when we released her. She and the cubs put on
weight and we feel really good about her freedom.  It's calving time for the
wildlife, so there are hartebeest an oryx calves everywhere, so there is
plenty of game for them.  Sjaak from Beeske Bergen was here and his wife
Christine with a film crew, so they got to film it. Also there was a German
film crew here and filmed it too.

We worked on Klein on Tuesday as well – he has what we think is a fungal
growth on his left front and rear legs.  So, we took scraping and biopsy and
won't know for ~ 2 weeks, as it takes that long to run the culture.

We did do an A-I on Uschi yesterday and again today.  It's a surgical
technique where you put the thawed sperm into the horns of the uterus.

I head down today to begin our international course – there will be ~20
professional conservation biologists coming from 8 cheetah range countries.
So, we have been very busy on all that.

I will be very hectic with this course going forward.  I know that there is
a lot still to do to reach our year end goal,