NamibRand Female - update as of 29/June 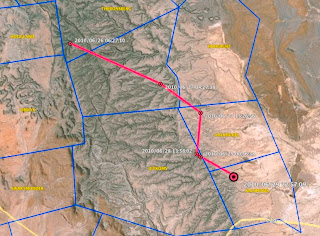 The female has moved onto new territory, for her, this week and I'm afraid that she has, at least for now, left Neuhof far behind.  I've had to add six new farms onto my map, all to the east.

The final point last week was on June 22nd.  We have no data for the 23rd, 24th or 25th, but by the 26th she was in the SW corner of Theronsberg. A day later she'd reached the far side of Harmonie, then she may have clipped the edge of Hoheacht, on her way onto the northern half of Kalkhugel.  She then spent the afternoon of the 28th and the very early part of the morning of the 29th on Uitkoms, before proceeding even further east onto southern Kalkhugel, when she was yesterday evening.

As of 11 PM last night she was 5 km north of the C19, 40 km east of the edge of NRNR, 28 km from Neuhof Noord, and about 48 km west of Maltahöhe.  There is no sign of her slowing down at present, so who knows where she'll be next week.