Hi-Fi gets a new collar 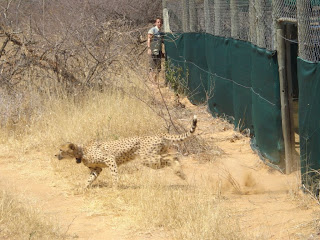 Remember the two wild males that had been hanging around the CCF compound for the last couple of years: Sam and HiFi --named after former Namibian President Dr. Sam Nujoma, and our current president Hifikipunye Pohamba. At the end of August we reported that Sam was found dead of unknown causes.

We captured HiFi on the 18th to check on him and replace his collar. He is in excellent shape at 53 kgs and perfect teeth. We took samples and measured him, checked him from head to tail, and replaced his collar with a satellite collar.

HiFi stayed overnight in a quarantine pen and released the next morning after a meal. I have included a photo of his release.