Another Cheetah goes to the Dentist.

After her annual health exam in early April, the CCF clinic team noticed that 8-year-old Rosy's teeth would need some attention due to root exposure in three canine teeth.

On May 10 she was taken to Dr. Denis Progfit, the local dentist in Otjiwarongo, and received three root canals on both lower left and lower right canines, and the upper right canine. The procedure took just over 1 hour and she was stable throughout anesthesia. 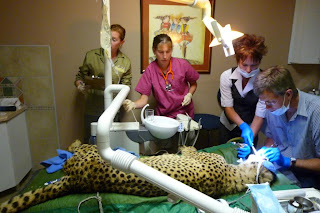 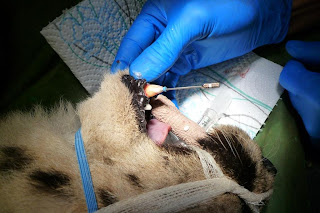 Considering her age, Rosy is in good health and condition. She has been moved to an enclosure closer to the CCF Centre to allow the cheetah keeper easier monitoring of Rosy and her fellow pen-mates.

All of this medical attention to CCF's resident cheetahs would not be possible without the support of our cheetah sponsors. Thanks so much!