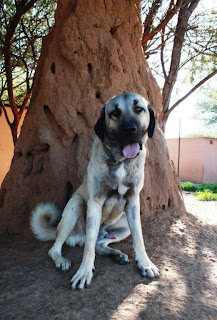 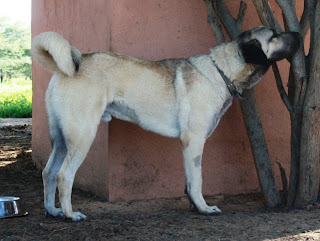 Firat, one of our breeding male Kangal dogs, had a serious encounter with a warthog in early January.  He was gored through the abdomen with a tusk and sustained wounds that went through his intestines. He endured a four-hour surgery to put his intestines back together and flush and clean out his abdomen. His recovery was slow but after several days he started doing very well. After losing several kilograms he also started eating well and gaining weight again. He is now back to his pre-surgical, healthy weight and is feeling fine. The fur over his abdomen and on his front leg where his IV catheter was placed is even starting to grow back. Firat is a lucky dog, as the injury could have easily resulted in death if the CCF veterinary team had not gotten him to surgery so quickly after the incident. A special thank you to Paige Seitz and Stephanie Pearce, our interns who nursed him back to health after his surgery. He will now live to father many more litters of future livestock guarding dog puppies. For an update on the latest litter he sired see our blog update on Kiri’s puppies.

Attached are two recent pictures of him; posing for the camera and sniffing a tree!