In the morning we mostly followed Luna through the previously burnt area of Bellebenno. At one point Erlend and I scared an adult female steenbok that ran away from us, passing a very relaxed Luna. Luna heard the approaching antelope, sat up and instantly began chasing the steenbok through the open bush. When we finally caught up with her, she had already given up the chase and stopped at a puddle shaded by dense bushes. As she drank, she was extremely vigilant looking up and around at any foreign sound. This cautious behavior was refreshing to observe because when any wild animal drinks, it is at its most vulnerable state, thus constant attention is needed to escape approaching danger. She drank on and off for eight minutes. Afterwards we went to Xena’s duiker carcass from yesterday. As I approached the kill to observe the remaining parts, Xena exploded out of the yellow flowers only 10m away. She charged me for getting too close to her kill, with her shoulders erect, head down and eyes pinned on me. I backed off and she returned to the kill, picked up the duiker by its ear then continued to feed. In the evening Luna moved 2.38km from her position earlier in the morning and Xena abandoned her kill. Only a few parts remained. I also observed some conspicuous claw marks in the soil beside the carcass. 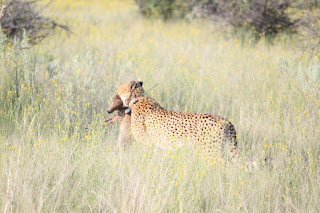 While searching for Xena, we accidentally found Luna. She was very tired and wet so we instantly left her to search for Xena. Four hours and many travelled hectares later, Joel (CCF intern from Holland) and I gave up our search for the morning. In the afternoon (after a torrential storm), a similar situation unfolded. We unintentionally found Luna again, this time nearly 3km from her spot this morning. It was not until 19:14 (after another 3.5hrs searching) that we had our first signal for Xena. We got a visual for her just as the sun was setting. She still had a large belly from her duiker kill. It is still a mystery to me how she escaped our tracking equipment all morning, afternoon and evening. We call her Xena “The Phantom Cheetah” as a result.

After Joel and I rid our clothing and skin from the hundreds of pepper ticks crawling across our bodies, we went to look for Xena for the second time today. Instead we found her spoor all over the roads, seemingly hunting warthogs. The tracks showed that as she hunted one warthog, it ran through a swing gate to escape. At this gate, Xena’s tracks abruptly stop, ending the hunt. We found her later, and she did not appear to have eaten again, although she looked healthy and fit. In the evening, when we found Luna, we sat with her as she lied beside the road. When we began to drive away, she instantly got up and began walking again. It seemed she waited for us to leave before moving! We observed her from our car as she walked away into the bush. If she does not make a kill tonight or tomorrow morning we will have to supplement feed Luna.

In the morning Xena darted away from us and we could not find Luna, although we did observe her spoor walking along the wet road with brown hyena tracks beside hers. Later we found Luna in a completely new territory. She was actually close to where we last saw Xena, near the Bellebenno entrance. When we found her, lying just beside the road/fenceline, she was not alert and nearly sleeping with her front paws crossed. She seemed comfortable with our presence, especially compared to Xena. Although I am certain Luna has been feeding (just not observed) I supplement fed her anyway as she appeared hungry and lethargic throughout the evening.

Joel and I found Luna first thing in the morning. She was still sleeping in the wet grasses and was located only 200m from where we supplement fed her last night. The rest of the morning (4+ hours) was dedicated to trying to find Xena. In the evening we got a signal for Luna heading away from the entrance gates and nothing for Xena. We spent the small remainder of daylight successfully getting our extremely stuck vehicle out of a muddy road.

Luna was once again sighted in the same general area as before (near the entrance gates) and Xena was still missing. We are beginning to assume that she has escaped the game camp. In the evening we found Luna again only 30m from a road feeding on a kill! This time she was tearing open a sub-adult female steenbok (~7kg) beneath the shade of an acacia bush. This was the third species (that we observed) she has killed. Luna ate for nearly an hour, consuming all but the skin/fur, head, leg bones and G.I. tract. She choked on some of the smaller rib bones but eventually continued feeding as normal. When finished, Luna slowly walked 3m from the carcass and slept the remainder of the evening. 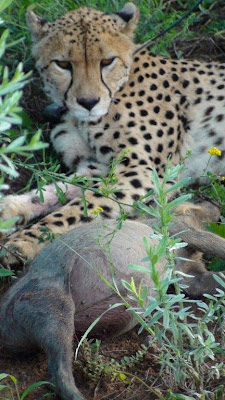 After a late start, I received a message from Rob (CCF’s Technical Specialist) explaining that Xena has escaped the Bellebenno game camp and is making her way towards the Big Field, a large plot of savannah-like habitat with few encroaching acacia bushes. We tried to find her based on this information, but it seemed that she had already moved away from her last location. Throughout the day we found Luna. She was either sleeping or lying, not alert in the shade digesting her meal

Once again we observed Luna sleeping away the majority of the day. Erlend and I spent the afternoon searching for Xena in the Big Field. Unfortunately we could not find her again, but in our search we had the privilege of observing three ostriches (2 male, 1 female), a rock monitor lizard and a paradise wydah!

In the morning, Joel and I found Luna lying in a large bed of grasses. She remained there even when she was completely exposed to the morning sun. Usually cheetahs will go find the best shade, but she seemed too comfortable to even move. Later we observed Luna hunting a steenbok through the bush. She was only metres behind the prey, but the chase ended unsuccessfully. She slept under acacia bushes the rest of the evening as a massive storm approached us.

Today was decided to dart (anaesthetise) Luna to remove her radio tracking collar and place her back in captivity – temporarily! Here is CCF vet's report:

"Luna had proven herself to be a good huntress and had brought down a variety of smaller prey animals in the almost four-week period she had been out. Since she was going to have to be immobilised anyway, she also had her annual examination and vaccinations at the same time. She was found to be in very good condition, quite lean, with a healthy hair coat and a low tick burden. She had a full set of samples collected, including blood and urine samples, vaginal cytology, hair, a dental exam, and ultrasound exam of her abdomen and kidneys. She was vaccinated for Feline Distemper and Rabies, and had Frontline applied for tick prevention. The team who worked with her in the field included CCF veterinarian Dr. Gabriella Flacke, volunteer veterinarian Dr. Erina Young, veterinary nurse Rosie Glazier, cheetah husbandry team members Rachel Shairp and Ryan Saucet, and two volunteer zoo keepers from Norway, Erland and Jimmy. Everything went well, and now that she has proven herself, hopefully Luna will soon be released into the “real wild” again in the near future."

Luna was then placed her in a small holding pen where I observed her as she recovered from the anaesthesia. 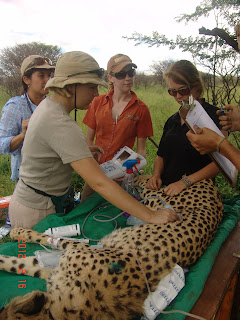 While leading the track for Xena, followed by Deg (CCF Bushblok) and Juliette, I came across an adult female steenbok kill wedged beneath a small bush. I instantly knew it was Xena’s and quickly backed away from the carcass. No more than five seconds later a hidden Xena came charging the three of us away from her kill. We gave her the space she needed and listened as she began feeding off the steenbok. Her kill was made in a completely open area with crippling tall yellow grasses that would seem quite difficult for a cheetah to hunt in, once again showing the adaptability of this amazing female.

Only having to track Xena now, Rachel found our free female on both days. On the 20th she was seen sitting on a termite mound then walking away. On the 21st she was observed near the edge of the Big Field. As it rained so heavily, Xena approached the car and Rachel decided to leave. 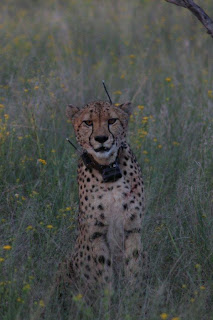 I found Xena today lying under a very small bush in the Big Field. She seemed hot, as she heavily panted beneath a small fragment of shade. I left her alone as she began walking, obviously trying to get away from me.

We will continue to keep you posted!

Ryan and all the Husbandry Team
Posted by Cheetah News at 8:52 pm