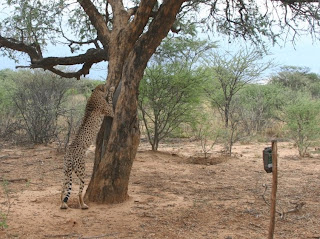 Two weeks in and all18 stations are clear and operating. Clearing the vegetation is very labor intensive. I was quick to learn that most plants in Namibia have well designed defenses. For example, the acacia trees, which make up most up the plant biomass in Namibia, have sharp thorns up to three inches long.  They are a formidable match!

Clearing vegetation allows the camera traps to trigger only when an animal is visiting the site. We want to avoid capturing photos of any moving vegetation. Clean sites also allow us to see tracks left by visiting organisms. In order to capture pictures of visiting cheetahs and leopards, all of our cameras are mounted on posts 75 cm above the ground. Ryan, Matti and I have been checking the cameras every Monday and Thursday. While visiting the sites, we check the camera’s position, film, and batteries. We also look for changes at each site to see whether or not a large carnivore has visited the play tree/play mound. We can confirm predator visitation by tracks, scat and scratch marks on the tree. This is important when working with film, because we are unable to determine what organism visited the site that day.

Our camera traps need their batteries and film rolls changed weekly. With camera traps operating for an entire three months, this study requires a great deal of resources.  We hope to switch to digital cameras in the future to reduce the need for upkeep and film development.

I’m really interested in studying how large predators interact. Cheetahs are normally diurnal predators, but we’ve captured them on film visiting play trees during the night.. This puts the cheetah in direct contact with CCF’s largest nocturnal predator, the leopard.

I’ve already began asking several questions over this study. I’m interested in discovering the importance of play trees to CCF’s large predators: How are play trees used in predator communication; how do play trees aid in the animals orientation; and how do cheetahs and leopards play tree use differ? Hopefully this year’s traps will provide some insight into the behavior of large predators in Namibia.  I look forward to sharing our results in the near future.