NamibRand Male Cheetahs and Shati Update as of 31/July 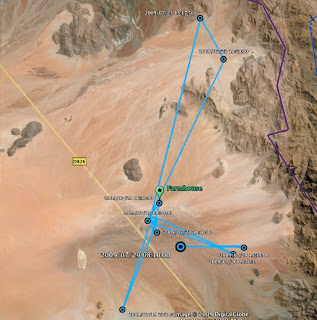 Behaviour patterns of the boys don't seem to be changing significantly as yet.  They continue to lurk close to the now empty pens where Rosy and Misty were, and to the farmhouse that is park HQ - regularly marking the outside of said farmhouse.  Some really good news though, is that on the 24th, they were seen in company of the very much alive Shanti!  Her collar has definitely stopped working, but she seems to be very healthy and is clearly looking after herself.

After some report from Sossousvlei Desert Lodge that they have seen six cheetahs instead of five at Toskaan, Florian saw Shanti today morning when he was driving from Aandstêr on the road to Keerweder (some few metres north of the pen). First he thought it was one of the boys but after searching and seeing the five boys on the other side of the road, it surprised him when he looked through the binocular and realised it was Shanti with her collar on. He tried scanning her but he did not pick up her signals which means the collar is not working. According to Florian, he clearly identified her and he is sure it was Shanti. It was impossible to take any photo as Shanti runs away in the long grass toward the koppie northwest of Keerweder. I think she has come up with the boys last night from Toskaan. Everyone at Keerweder was so excited to hear that she is probably alive.

The boys hunted around the 29th, but we were unable to confirm what, although there were a lot of oryx in the area.