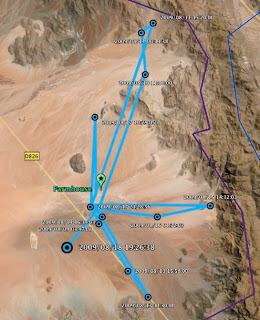 Firstly, the boys hunted and have fed well. I have a very interesting day yesterday observing them feeding on adult female springbok carcass. It was next to the fence but there is no sign if they have used the fence to catch it as they have done it last month (chased the springbok into the pen fence). They were full and poor things can barely walk, found them resting in the tree near the main road on Wolwedans side. After some minutes of observing Mushara woke up, mark the trunk of the tree and then showed us where the kill was. He walked toward the bush and starts feeding on a springbok kill, it was fresh and half eaten. It was approximately 15 m in the bush from the tree were they were resting. Ra and Kia remained in the tree still resting while Cadbury and Lindt joined Mushara on the kill.

In the afternoon I got a report from Tok Tokkie guide who drove from Keerweder to Tok Tokkie that the boys are stuck in the corridor on the main road (between the two fence for Wolwedans and Toekoms) and they are trying to find their way, but they are being disturbed by the road users, stopping their cars and observing them. We tried getting them out by opening up the gates to let them find the way into the reserve and finally we succeeded, all five find their way back into the reserve. We left them walking toward Keerweder yesterday late afternoon, no sighting for them today but their signals are around the pen.

That’s all for now, I will be in touch soon…