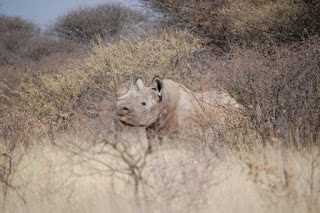 HI – quick update on the last few days. We received two young female rhinos on Wednesday. They arrived just at dark and we drove them to the release site. These two females are 3 and 4 years of age. This release was a bit different than the males a couple days before. The one female took off like a bolt of lightning after being reversed from the sedative that kept her calm during her 3 hour trip from capture to CCF. In addition, the removal of the blindfold over her eyes and the ear plugs all made her senses come alive! So, she ran out of her crate fast into the dark and we could hear her for a couple minutes after release still running. The other female came out of her crate like a calm horse – she stepped out of the crate, walked a few feet, put up her head and sniffed, then walked slowly over to the nearest tree and just stopped. Over a half hour later, she had moved around and far enough from us that we could get the truck to our release area to pick up the crates again and drive away. Watching her, even in the dark, was such a peaceful experience. So, this week, these rhinos have given me one of my biggest thrills (the big males release) and one of the most tranquil moments – Rhinos are such a special animal. Over the last couple days, the big male (photo attached) has shown himself a couple times as our staff has been radio tracking them – he is magnificent! These are the last of the six rhinos that will be coming to CCF. We do, however, need to come up with ~$5,000 to support their transport to CCF. CCF is one of one a few sites selected by the Ministry of Environment for rhino relocation, and we are hoping that they can assist us in habitat restoration on our thickly bush encroached rhino sanctuary land.

On the cheetah front, we had to do minor surgery on one of the new cubs. Shoulder as we have been calling him, needed to have the gash on his shoulder re-stitched. We now hope that these stitches stay in better and that his shoulder heals. He and his siblings have accepted our care and are doing well, they are generally playful in our outside cub nursery area.

Chewbaaka is doing OK – from his enclosure he can see cubs and keeps a close watch on them.

We also have a BBC Film crew here for the next few days – they are filming our cheetahs running for a documentary called the Perfect Predator which will air in early 2010. We also have a group of 20 teachers from different areas of the US conducting their on-going education from Miami University in Ohio, USA. They are working on learning centered approaches in education. CCF and Miami University and Cincinnati Zoo have worked together for the past five years.