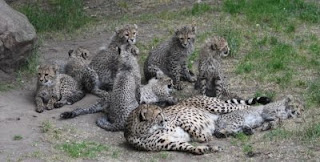 We just received a new donation from Borås Djurparks in Sweden. CCF has been the zoo’s main in-situ support project for several years. In addition to donations from zoo visitors, Borås raises funds in many other creative ways, one of which involves donating a portion of their bottled water sales to CCF, and it really adds up!

Along with the news of the donation, Bo Kjellson, our long-time friend and General Curator, sent us some pictures of the eight cheetah cubs (six males, two females) born at the zoo in the middle of the Swedish winter. This is the second litter for six-year-old female Luanga, born in Munster. According to Bo, “Historically we have not found any occasion in Europe where a cheetah got eight cubs and where all survived, so this is a record.”

With this birth, the cheetah population at Borås doubled!

The cubs are gorgeous. Thanks Bo for sharing these images, and for your continued support!