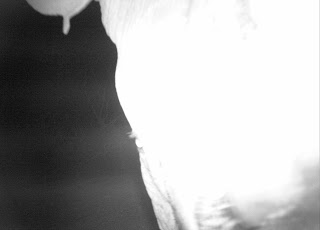 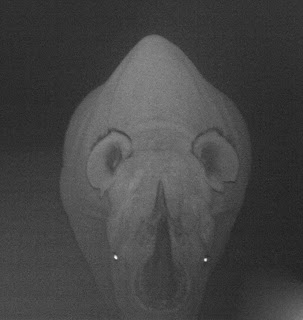 I've included two front views of rhino 4 for July.  The first shows an extreme close-up just an instant before he scraped the camera that took the picture off the tree it was tied to.  The following day the camera was picked up by a baboon and carried 74m down a nearby game trail before being discarded face up.  It continued to take photos for several more days before being kicked hard enough to dislodge the batteries.  I finally tracked it down two weeks later after watching baboon movements in the area to see which direction they usually left in.  The camera has since been redeployed in the reserve and is working well.

The second image is a lot clearer, but if you look at the rhino's right ear in each picture you will see a distinctive band of skin hanging down from it that uniquely identifies this male.