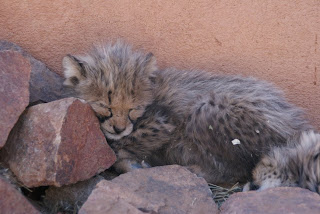 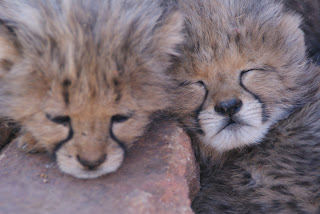 Here are a couple of photos of the Okakarara cubs --or the OK Clan-- just received from Namibia. A tired out little cheetah cub takes a rest following an afternoon of playing with her siblings, and two little cubbies napping after an afternoon of playing. At nearly seven weeks old, the cubs are eating well and becoming much more aware of their environment. They will start getting three feedings per day as of today.

The cubs have been named. The sweet little female is Tiger Lily, who according to Laurie came out screaming like a tiger! And since OK Clan sounds like a Western, and Tiger Lily was an American Indian saved by Peter Pan, that’s what we named the small male cub. The bigger male cub was named KhayJay, keeping with the Indian theme in mind –although this from the Hindu word that means “charge into action,” which is just what we’re doing for the cheetah! Finally, the other little female is Seney (a Turkish word meaning Lovely like the Moon).

We hope you like the names. We’re also happy to report that Chewbaaka is doing great, and so are all the puppies.