Preparation for the Release of Four Leopard Pen Males

Just over a year ago, I was here at CCF monitoring the Chocolates and Chanel --four captive female cheetahs that beat all odds to become wild, self-sufficient cats now living at Erindi. This year I will hopefully be doing a similar story.

We just collared four of CCF’s resident male cheetah males living in the Leopard Pen: Ombdillo, Chester, Anakin and Obi-wan. In preparation for this, the CCF keepers fed them their first carcass a few days earlier. To simulate a hunt, we made them work for their meal by having them run around the fence a couple of times. This coalition will be released on Saturday into the 4,000-ha Bellebenno camp to begin their training for a life of freedom. 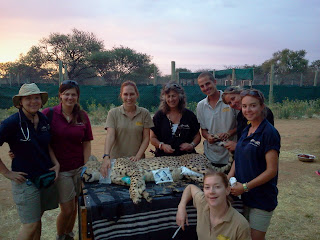 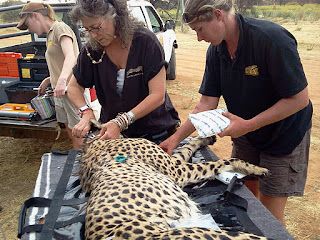 We decided to give them an unopened carcass to observe how well (or not well) they could open it. Opening a carcass is quite a challenging and complicated task. It can take quite a bit of effort from the cheetahs and they must also have good enough teeth to accomplish this task quickly. Ombdillo, being the one who arrived at CCF at an older age and had experienced life in the wild, was the first to feed. It didn’t take long for the other three to join, and so far, all four cats showed promising behaviors that are indicative of that of wild cheetahs

It is always exciting watching and recording behavioural information on cheetahs just prior to their release because you get to see how their behaviours and individual characteristics are in captivity. In the wilds of Bellebenno the cats may take on completely different roles compared to that in captivity. Over time I will be able to record these changes and see how these dynamic cats learn to be wild again.

I believe that the first week of the release will be the most exciting. In this time we will hopefully see who makes the first kill (or kill attempt), who scent marks the most, or who the other cats follow. But for now, we are confident that these healthy boys will be very successful in Bellebenno.