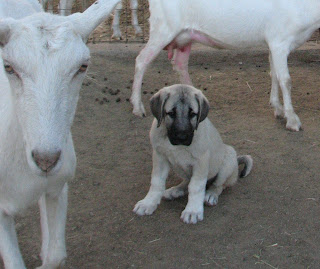 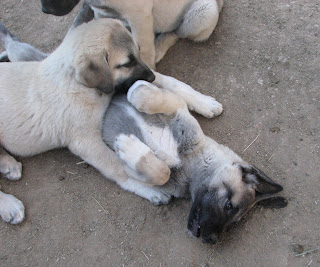 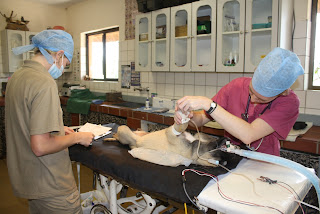 I met Kiri’s eight puppies during my visit to CCF a couple of weeks ago. I feel lucky to have met them because they were just about to be placed within a few days of my departure! They are beautiful, very healthy, and definitely a handful!!!

You might remember that Kiri is a Kangal that gave birth to eight puppies on 31 January. She was bred to CCF’s Kangal Firat, who was kindly donated to us by French breeder Bonnie Blue Flag.

In late March, the puppies underwent their routine sterilization surgeries (photo).  Only some of the puppies in the litter were sterilized since a few will go on to be future breeding animals for CCF’s livestock guarding dog program.  Our vet Gaby explained the procedure to me. “The puppies first received a full physical exam to ensure they are healthy enough for surgery.  Then they were anaesthetized, given oxygen and anaesthetic gas via an endotracheal tube, and attached to anaesthesia monitoring equipment like a temperature probe, an ECG, a pulse oximeter, and a blood pressure monitor, just like in a human hospital!  The puppies also have an IV catheter placed and receive IV fluids to keep them well hydrated during the surgery.  A microchip transponder is inserted under their skin for future identification, and blood samples are taken for genetic analysis and general health evaluation.”  All the procedures went well, and the puppies were back in the kraal with their mom in no time.

As Kiri does not belong to CCF, half of her litter went to her owners, who took two of the puppies to their farm and placed two with friends as working dogs.  Of the four CCF puppies from the litter, two were placed as working dogs, while a male and a female will be breeding dogs because their genetics are quite valuable.

We wish all these puppies a happy and healthy life saving cheetahs!