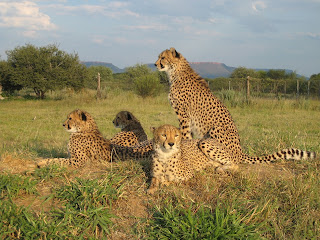 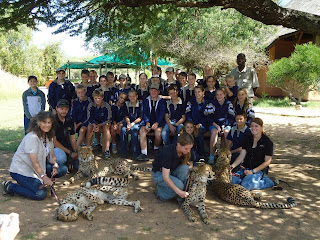 The group formerly known as the OK Cubs (‘OK’ stands for Okakarara, where they were originally from) - Peter, Kaijay, Senay and Tiger Lily - cannot really be called cubs anymore. At almost 21 months old, these cheetahs are quickly becoming adults and are really stepping into their role as the Ambassadors of CCF. For those of you who are new to our blog, these four siblings arrived at CCF in 2010, when they were just three weeks old. Because they were so young, it was necessary to bottle-raise them, which led to the unique opportunity of raising cheetahs as ambassadors for their species. These ambassadors are an extremely important education tool for teaching the general public about the cheetah’s biology, conservation and threats. This task varies from meeting the general public on cheetah walks when they visit the CCF centre, to being brought out for farmers and school groups. Seeing cheetahs without a fence in between them and the cat allows people to form a more emotional connection with the animals and therefore sympathise more with their continuing struggle for existence.

A great deal of time and energy has gone into the training of these four cheetahs in order to ensure that they become successful ambassadors. This training is an ongoing process that involves continued human contact, but they should never be thought of as pets. These cheetahs are, and should always remain, wild animals and should be respected as such.

As ambassadors, the OK cats meet many influential people. For example, in January of this year, they met British High Commissioner, Marianne Young on her visit to CCF, as well as the Namibian Minister of Environment and the US Ambassador to Namibia. Additionally, another important part of the OK Ambassadors’ job is to meet school groups, both Namibians and internationals. For the kids, meeting a living, breathing cheetah up close can make a much more significant impact, and will hopefully help spark a passion for conservation as these children grow up.

The OK Ambassadors even help educate people during their lunch hour! In January, they joined the ranks of the other cheetahs at CCF’s centre, which are fed daily for visitors to view. This is an important milestone in their training, as previously they were fed away from the public eye. They started eating with the other centre cats when their diet changed from two meals a day to one per day, like the other adult cheetahs at CCF. Feeding in front of visitors gives CCF the perfect opportunity to teach visitors about the cheetah’s diet, while they witness the cheetahs eating first hand.

This April, the Ambassadors were anesthetized for their first annual medical work-ups. They had measurements taken, their teeth checked, and blood samples collected, among other things. Tiger Lily had a small growth just above her front right paw that was removed and sent to the lab for identification (more information on this on our 27 April 2012 blog). The procedure went well, and has been healing nicely. Peter and Kaijay were given contraceptive implants, so that as they mature, all four ambassadors can still be kept together.

Usually, when the Ambassadors go on walks around the centre, we make a stop at the clinic to weigh them. This has allowed us to consistently measure their growth. Unfortunately, our walk-on scale malfunctioned a couple months back and so we haven’t been able to see how they have been growing since the beginning of the year. However, we took the opportunity to weigh them while they were anesthetized for their annuals earlier this month. Peter was the biggest, weighing in at 41 kg! The ambassadors are unlikely to grow much bigger in height, but will continue to gain weight over the coming months. Peter and Kaijay may reach close to 50 kg, while Senay and Tiger Lily will likely reach their mature weight around 42-45 kg.

In order to maintain the Ambassadors’ fitness, we try to exercise them on the lure system at least once per week – an activity open to the public. Currently, they are some of our best runners, and continue to impress visitors and staff alike.

We shall continue to update you on their progress as the very important role of Ambassadors of their species.