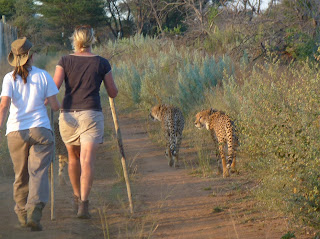 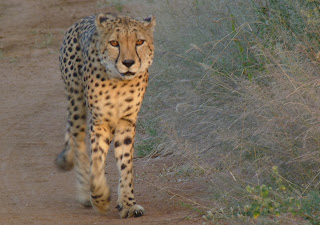 CCF is proud to announce that yet another cheetah re-wilding is underway.  On the 18 April, a coalition of four male cheetahs named Fossey, Darwin, Mendel and Livingstone were released in to our Bellebenno training camp in order to prepare them for a permanent release elsewhere.

The 3,000-hectare camp offers all the environmental variables that the cheetahs can expect to encounter once released: prey animals, threats such as leopards and hyenas, potential competitors such as black-backed jackals, and limited watering locations are all among the lifestyle changes that the group will need to learn to negotiate in order to become successful in the wild.  As a coalition of male cheetahs is a natural occurrence, it is expected that the four males will remain a tight team of cooperative hunters, further increasing their chances of survival in the wild.

The males were released early morning from wooden transport crates next to a waterhole with one last free meal provided to them to entice them out of their crates. They exited with surprising confidence, circled the immediate area briefly, before homing in on the meat.

Although now acting of their own accord, they are being carefully monitored by experienced CCF staff in order to gather as much data on their progress as wild cheetahs as possible. All four individuals were fitted with VHF radio collars prior to release, allowing us to track their movements and observe their development.

The group will not be in the position to learn the crucial skills of life unless both cooperative hunting techniques and confidence are forced by an empty belly.  It appears they learnt quickly, because several days after their release, they were seen eating a dead zebra!  What’s perhaps more impressive is that they managed to maintain possession of the zebra throughout the night and into the following day from other predators in the area.  They have also managed to successfully hunt and kill an oryx since their release, so it is great to see their hunting skills are becoming finely tuned.

The coalition will remain in the camp until all the skills necessary for survival have been not only learned, but rehearsed enough times to give us confidence in their abilities to live in the wild, free of human intervention. This may take a few short weeks or several months to acquire. We will keep you posted on their trials and tribulation over the coming weeks.