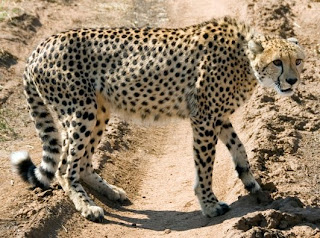 It was a sad day for CCF on Saturday, May 19th, when we had to euthanize Tempesta, a 9-year old cheetah who came to CCF in late 2003.  She had not been eating for several days and hadn’t been feeling well for about a week previously.  However, since animals are very good at masking signs of illness, she had been declining slowly over the last few months until she reached a point where she could not longer compensate.  She was in severe kidney failure.  Her kidney values were almost too high to be measured, indicating her kidneys were no longer clearing toxins out of her bloodstream.  An abdominal ultrasound exam was performed and showed a very small, misshapen left kidney.  A wild animal unfortunately cannot be treated and hospitalized like a tame pet, and so giving her fluid therapy and supportive care was not an option.  But in this case, given the severity of her kidney disease, she would not have recovered even with aggressive medical treatment and we did not want her to go on suffering.  A decision was made by the veterinarian, the cheetah curator, and the general manager to euthanize her, rather than cause her unnecessary stress by attempting treatments that would be unlikely to help her feel better.  We were grateful for the fact that once she became noticeably ill, she went downhill relatively quickly rather than being in distress for a long period of time, and now she is no longer suffering.

Her post mortem exam revealed that both of her kidneys were actually quite abnormal, with the left one being very small and scarred, indicating it had likely not been functioning for quite a while.  Even her right kidney, the “healthy” one, was very abnormal in structure even though it was not shrunken like the left one.  Unfortunately kidney disease is fairly common among felines, both in domestic cats and large felids like cheetahs.  Generally the condition occurs in older animals, but young cats can also be affected with a condition called polycystic kidney disease which can cause kidney failure at an early age.  Tempesta was middle-aged for a captive cheetah, but older by “wild” cheetah standards.  We are happy that she enjoyed a comfortable life here at CCF during her tenure with us, and she was extremely well cared for and loved by her caretakers.