Our return to CCF

Want to rake and shovel tons of goat poop every few days?  Pick up fresh carnivore scat with a twig?  Care to clean cheetah pens  – all the while fending off the thorns of the omnipresent acacia bush?  Perhaps you’d prefer to spend hours doing data entry, sitting in front of a computer and entering statistics from game count drives, or separating out microscopic-sized hairs from fecal samples for analysis?

Perhaps not.  But then, how would you ever know the joy of beginning each morning’s journey to The Hotspot with a detour to watch baby goats cavort and bleat in their joyous, silly way?  And how would you ever be lucky enough to greet each morning, afternoon, and evening with the sight of lean, magnificent cheetahs walking their regal stride, splayed out in the shade of a tree, heads raised poised and alert, or accelerating with the speed and grace that makes them so captivating?  And how would you ever feel that connection, that rush, upon looking into a cheetah’s face and seeing that artistic tapestry of spots and lines and those haunting eyes, orange orbs that return your gaze and make you feel humbled?  And how would you ever get to be part of the world of this remarkable animal and the effort to ensure its survival … while surrounded by sights and sounds of Africa’s beauty:  kudus and warthogs at a watering hole; giraffes, oryx, zebra, red hartebeest, eland, ostrich dispersed in a golden field; breathtaking  sunsets with the Waterburg plateau as a backdrop; and memorable sounds of the hornbill, the lorie bird, and the korhaan? 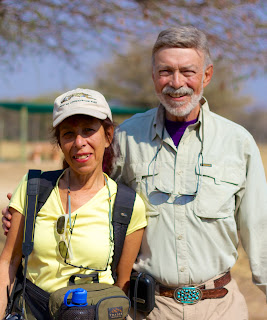 Hill and I, lifelong criminal defense attorneys from NYC, dedicated to representing the indigent, returned to CCF as volunteers for a second time because we feel both inspired and privileged to be part of this endeavor not just to save the cheetah but also to do so in a way that might, hopefully, be a catalyst and model for preserving other wildlife here and elsewhere.  We hope to return yet again, to join the mission and dedicated, welcoming staff of CCF.