The need to raise funds and awareness about the plight of the cheetah takes me on the road quite often, and every trip I’ve taken has given me the opportunity to meet with memorable people, and visit memorable places. 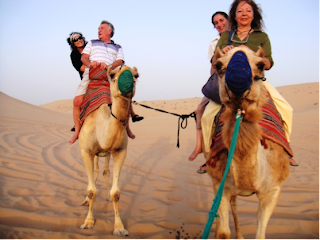 One such place is the Management of Na ture Conservation (MNC) facilities in Al Ain, United Arab Emirates. MNC is operated under the Department of the President’s Affairs. 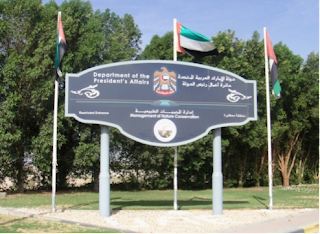 During a lecturing trip to that country with my Assistant Directors, Dr. Anne Schmidt-Küntzel and Patricia Tricorache, I had the privilege of reconnecting with a long-time friend, Willie Labuschagne (all of us above photo on camels), who under the direction of His Excellency Mr. Abdul Jaleel, Director General of MNC, is responsible for an impressive operation that includes scientific research and conservation initiatives.

There, in the middle of Al Ain, a name that means “The Spring” as the city is known for its seven oases, the MNC is an oasis in itself. A beautifully landscaped area called the Savanna covering more than 300 hectares, provides natural settings for 8 species of mammals and 8 species of birds, including the majestic nyala, greater kudu, grey crowned crane, Caribbean flamingos, Damara springbok, Soemmering’s gazelle, Nile lechwe, kob, Grant’s gazelle, sable antelope, Blue cranes.

The savanna is just the beginning. The compound houses state-of-the-art research and diagnostic laboratories, including a genetics and veterinary division. World-class scientists were generous in sharing with us their knowledge, covering areas like veterinary pathology, embryology, animal management, reproductive physiology, and genetics. Meeting them and being able to exchange experiences and ideas was a truly important gift for us. 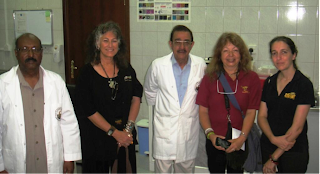 The MNC is concerned about endangered species, and manages two impressive captive-breeding programmes, the Houbara bustard (Chlamydotis undulate) and the Arabian tahr (Arabitragus jayakari), a goat-like ungulate endemic to the southeastern corner of the Peninsula. The tahr’s entire world population of less than 2000 occurs in the mountains of northern Oman and the United Arab Emirates. The MNC’s conservation model for this species was recently awarded the Certificate of Excellence by the Leibniz Institute for Zoo and Wildlife Research in Germany in recognition of its dedicated contribution towards saving the Arabian tahr from extinction. MNC was the first facility to successfully produce Arabian tahr through artificial insemination.

It is only through exchanges of information and ideas that scientists draw valuable information and research ideas. Unlike CCF, the MNC does not work with carnivore species; however, the knowledge we acquired through conversations with the scientists, and the visual impact of such a well-designed facility, left us with lots of food for thought.

During our stay, Willie also arranged for us to visit Al Bustan’s cheetah breeding facility where we met with the manager Meyer De Kock.   There we began discussions about the planning of a follow up visit and workshop with other facilities in the region.

It is impossible to thank our hosts enough for having provided us with this unique opportunity. Thank you to the scientists and researchers at MNC, to Willie Labuschagne, to His Excellency Mr. Abdul Jaleel Abdul Rahman Al Blouki and very especially to the Chairman of the Department of the President’s Affairs, His Excellency Eng. Mubarak Saad Al Ahbabi. 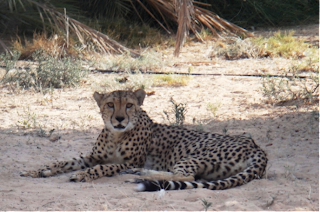 Posted by Cheetah Conservation Fund at 11:58 am