Hifi: The End of an Era 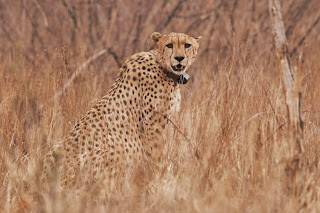 Last week we recovered the remains of Hifi, one of our wild but resident cheetahs that we have monitored for over five years. We do not know why or how he died, but his remains were found in CCF’s Little Serengeti (the Big Field). Tiger, one of our scat detection dogs, discovered his remains in a location nearby the latest GPS coordinates downloaded from his tracking collar. The scat detection team, Eli and Stephanie, immediately alerted other CCF staff His last confirmed sighting was at the end of September when he was observed on a red hartebeest kill.

Everyone who has visited CCF over the past five years has heard the story of Hifi; the wild cheetah who chose a home range encompassing CCF‘s Centre and who was regularly seen with his brother, Sam (who died roughly 3 years ago), courting the captive non-releasable female cheetahs at our Centre.

It is hard to put in words how sad we are to know that Hifi is no more, but as sad as this is it is the harsh reality of life in the wild. Every day is a fight for survival and Hifi, with an age of over eight years, did brilliantly. He always had a full belly and was never bothered by other cheetahs in the area.

CCF caught, examined, collared, and released Hifi and Sam for the first time in 2008 on Namibia’s Independence Day (March 21), and thus were named after the Founding President of Namibia, H.E. Sam Nujoma, and our current President, H.E. Hifikepunye Pohamba, who were and still are the ultimate guardians of wildlife in Namibia.

Data from Hifi and Sam has contributed much to our knowledge of cheetah biology and ecology, as the opportunity to monitor and study an individual cheetah(s) for such an extended period of time is a very rare opportunity indeed. Through satellite collar downloads, camera trap photos, spoor tracking, and regular scat collection, CCF has gained valuable insight into the daily distance moved, home range, feeding behaviours, and habitat use of wild cheetahs. In addition, his visits to our Centre allowed us to monitor the oestrus cycles of our captive female cheetahs and study the unique behaviours that correlate with oestrus. 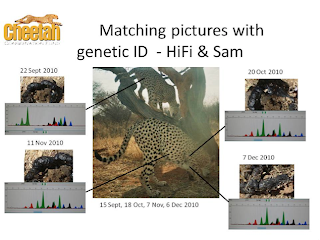 Occasionally we had the opportunity to study Hifi more closely whilst doing a work up under anaesthesia to change his radio collar. This enabled us to collect blood samples for monitoring his overall health, to conduct DNA analysis, and to collect and freeze sperm samples from him for our Genome Resource Bank. Overall cheetah sperm is of poor quality due to the lack of genetic diversity throughout the species, and though his was not much different structurally during his last work up we were able to bank 39 straws of sperm, which is an amazing quantity (average is 5-10 straws).
Over the last five years we have gathered a huge amount of data not only from the work ups and his satellite collar but also from his scat. We have collected over 800 scat samples in total whilst carrying out our daily ‘scat walk’ around the Centre. The scat allows us to conduct research on the diet and prey preferences of HiFi and to study his DNA extracted from the scat in our genetics lab. The scat will also be used in hormone studies to learn more about the relationship between hormones and stress in wild cheetahs. We are currently looking for funding to complete these studies.
Over the past five years Hifi has been captured and released seven times! Many CCF volunteers and interns have observed these procedures and cherish these memories. Hifi learned to live with us all; people, dogs, and small stock and was only interested in our/his female cheetahs living at our Centre.

In the past five years, Hifi has taught us so much. We lived together in harmony and got to know his movements and behaviour in a very unique way. He will be remembered by all of us at CCF. We hope that there are many little Hifi’s running around in the wild to ensure he lives on and continues to help in the cheetah’s race for survival.
Posted by Cheetah Conservation Fund at 4:20 pm