One arrived to the Cheetah Conservation Fund (CCF) at four and a half months old, the other, four and a half years old. Luna and Athena, two of CCF’s captive female cheetahs, were selected to be translocated to Erindi Private Game Reserve in Namibia to live the remainder of their lives in the wild.  Sharing their new home with lions, leopards, rhinos, elephants, hippos, crocodiles and other cheetahs was going to be an interesting and challenging experience for our cats. 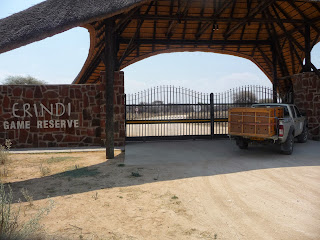 These two females were chosen to be re-wilded based on many conditions.  Luna was always a wild-behaving cheetah in captivity, spitting and hissing at her keepers and causing fights with other females in her enclosure.  Despite arriving to CCF at such a fragile and inexperienced age, it was decided to put her through the soft-release program in January 2012 to see if she could hunt and find water on her own while inside CCF’s 4,000ha game camp.  Luna dominated, preferring to hunt duiker and warthog piglets.  In mid-October 2013, she returned to the game camp for a second time and once again she exceeded all expectations, plowing through our eland calf population. 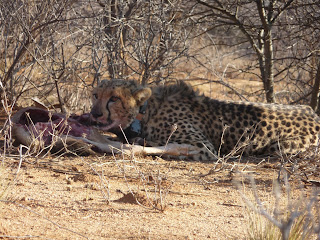 Athena came to CCF at a much older age and it was already known that she could hunt.  However, she was captured twice by famers for hunting livestock and could not be returned to the wild as she was now considered a “problem animal.”  Athena was previously known to CCF staff as “Toeless” when our veterinarian team had to amputate one of her toes as a result of an injury she obtained from the trap cage and enclosure of her first capture on a farm in Gobabis.

Luna and Athena were put into the same enclosure together for nearly a month prior to going to Erindi in a last minute attempt to bond them.
On 15 October 2013, the females were captured in transfer boxes and transported to the game reserve to start their new lives as wild cheetahs.  They were released together at a waterhole in front of the lodge with over 80 guests watching less than 100m away, all of us sharing an unforgettable experience. The box doors were opened and both females bounded out, as if inhaling freedom for the first time.  Athena ran off and did not look back.  However, Luna was called back to the waterhole by Head Cheetah Keeper, Juliette Erdtsieck using an eland calf leg as bait.  Luna ended up ignoring the calf leg and went straight to the waterhole to drink.  Later in the evening, the cats were found again and the two females were found together crossing a road! 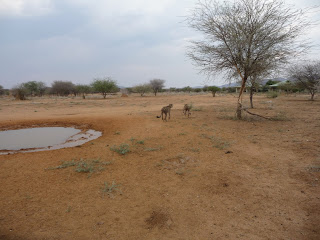 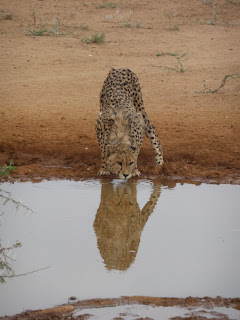 After the first week in the Erindi, the two have since separated.  Athena (5 years old) has managed to kill two young male piglets and a newborn oryx calf, however has not found a reliable water source yet.  Luna (9 years old) has returned to the release site waterhole several times now, but has remained unsuccessful at hunting.  Luna has been supplemented with food to keep her energy up.  Both females have run across the foreign sounds of nearby lions and hyenas but have managed to avoid these larger predators.  Luna has already been observed by many tourists as she is most comfortable with the safari vehicles.  Athena still retains her wild attitude and refuses to let the safari vehicles close to her, even the ground team is having a difficult time tracking her.  Our goals for the next week are to slowly habituate Athena and have her find water.  For Luna, we just need her to make a kill! 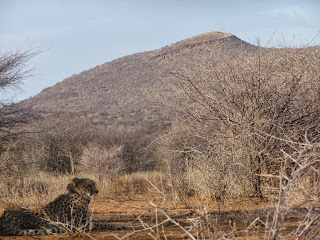 Stay tuned for future updates on the freshly re-wilded female cheetahs of Erindi.