NamibRand Female - update as of 8/2 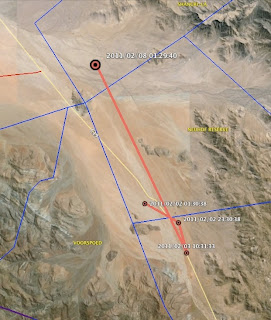 We do have slightly more data this week than last - three points instead of just one, and I have also included last week's lone point so that you can see exactly where she is coming from.  Close examination of the raw data from the satellite indicates that the collar made several more attempts to communicate data on the 7th and 8th, which suggests that there is still life in there.  Only time will tell however.

There is still no indication that the female crossed the border into Voorspoed, but she did remain in that area on the Neuhof side for at least a couple of days.  Now however she has moved north once more and onto yet another new farm for her - the exotically named "Shangri-La".