Hello! We are having intermittent email reception due to satellite issues, but thought I’d send a quick update on what’s going on here at CCF.

Our international course has been here for a week – and all the participants are great! They come from Namibia, Botswana, Zambia, Zimbabwe, Kenya, Benin and Brazil. CCF’s 2010 Cheetah Conservationist of the Year Award recipient, John Kasaona, was here to talk to the course participants and did a fantastic job. John is Chairman of the Namibian Association of Community Based Natural Resource Management (CBNRM) Support Organisations (NACSO).

Incidentally, John will be in the US as a speaker at the Association for the Promotion of Tourism to Africa (APTA)’s events: Focus on Africa and Discover Africa, which will be held in Denver, Seattle, Phoenix and Los Angeles starting the 8 March. For information please visit the APTA web site. These events will provide a wonderful opportunity to meet trade representatives from Africa.

We have a new vet, Anna Haw, and she’s great. Saturday was her first day working on cheetahs when we worked up on three males with the help of the international course people. The males, Chuck, Geno and Crosby, have been here for about a year and were recently moved to the Scar males’ enclosure. All six of these male cheetahs will be moving to Naua Naua – a lodge near Etosha, where we have had four other cheetahs over the years. One of those cats has a bad molar and we need to take him to the dentist; it will be either a root canal or an extraction.

Yesterday we fitted a collar on the wild female cheetah that arrived here at the end of October. Remember? She had had some dental work done. We had been waiting for a satellite collar which after two months finally arrived from New Zealand – it apparently was lost en route for a month so they finally sent another one. She and her two sons, along with two other female cheetahs, have been living together for the past month to get used to each other so they can all be released together. We hope will stay together as a family. 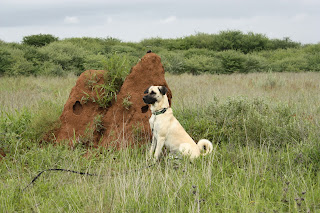 Isha, our scat detection dog killed a spitting cobra a few days ago. She scared us all badly as we originally thought that it was a mamba, which would have meant certain death, but fortunately she is OK. It is interesting that she has gone through snake avoidance training, and yet I think her guarding bloodlines are just so very strong.

At CCF’s teaching farm, all our goats and sheep are having their kids and lambs. Yesterday morning we had two lambs. We now have ~ 28 goat kids and ~ 8 lambs with more to come. Timing births of livestock is an important element of avoiding conflict with predators.

Rains have continued. Sunday we had what we call a “dam-filling rain,” with about 40 mm in just about 30 minutes. Heavy rains have caused a few problems on our thatch roofs, so some will need to be repaired or replaced. For those of you who have been here, The Hot Spot, our common dining area, had roof damage and we had to put a tarp over it. However, with heavy winds, the tarp blew off! That roof will have to be replaced. With the rains we have also welcomed our first group of volunteers this year: five from Earthwatch and four private volunteers. We also have a film crew from Wildlife SOS in the UK, so there is plenty going on here!

Finally, all the cheetah cubs are growing like weeds.

All the best,
Laurie
Posted by Cheetah News at 8:37 pm