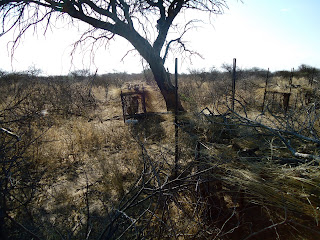 On Wednesday, a farmer called with three cheetahs in a trap cage (photo). Since my life here in Namibia had not started as of yet as I just arrived from NY and London last night, I decided that this would be a good time to load up staff (Gail, Kat, Rick) for training and we went to pick up the cheetahs.

We thought that they were adult males from what the farmer had said. The farm is on the other side of the Waterberg near Okakarara area. He was a very nice farmer and willing to talk about behavior and cheetah removal and livestock losses. We had a long afternoon, collecting the cheetahs, and getting back to CCF well after dark. I think Gail, Rick and Kat learned a lot as to how to give questions to farmers and how to get not only answers but cooperation and friendships. 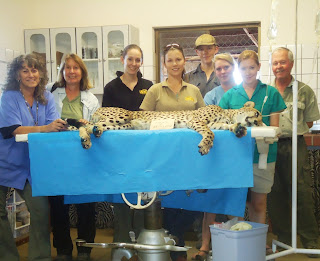 We worked them up on Thursday, and the farmer had hoped that he could have come to view the workup, however, he did not make it. As we worked on each of the cats, the story of what might have been happening with these cheetahs came to light.

The first and second cheetahs were young males – about two years old. They were good weights, and in very good condition. We collected sperm from them, however the first male had underdeveloped sperm and his brother had a bit better sperm that we did freeze in our genome resource bank. The third cat was a female, and that's when then we realized that the three were a mother and her nearly adult male cubs. She was in good overall condition, however, she has a broken canine tooth and her feet were raw from the capture cage.

They have been put in our quarantine pens and we have made a dentist appointment for the female for next week. We hope that they will be ready for release again in the next couple weeks. We are eager to see how the pads on her feet heal when we work on her tooth next week.

Laurie
Posted by Cheetah News at 3:43 am