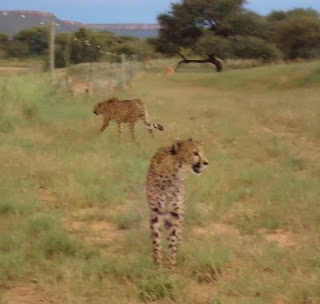 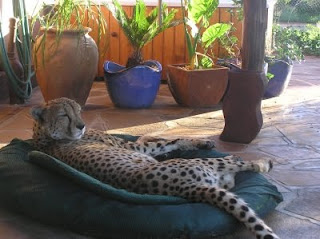 Here is the first of what we hope will be a weekly cheetah husbandry update from CCF’s cheetah keepers in Namibia. Enjoy!!!

All of our cats, though a bit more lazy this past week due to the humidity, are in good health.  Below are some of the ‘highlights’ from husbandry this week.

Klein’s daily treatment continues.  At the end of the week, his lesions look much better; he has been taking his meds, and allowing Matt and Kate to spray his legs.  Merlot continues to be a supporting coalition mate.  When Klein was brought back to the pen after his recent cryo-therapy session, Merlot was there waiting to greet him with a head nudge before both ‘brothers’ walked to their favourite shady spot in the pen.

The handsome Scar boys Phil, Tony, and Mischief continue to adjust well to their new enclosure next to the Eland girls.  They enjoy running alongside the bakkie, and wait patiently for their meaty reward.  Eland girls, Padme and Bella have also shown a bit of interest in their new neighbours as well by rolling on the ground near the fence line.

The Eland girls (Sandy, Dusty, Blondi, Padme, Bella, and Samantha) are enjoying their new run area, while the other girls, Shadow and Amani continue to get their exercise chasing behind the bakkie.

Harry, Hermione, Polly, and Tiny have shared their run area with our three Stars, Phoenix, Quasar, and Soraya (photo).  The run area has again been modified/extended, as both groups of cats need more space to display their graceful skills.  Quasar especially has been able to really extend himself in the larger run area, and gives his sister Soraya a bit more competition for “Best Runner”.

Chewbaaka has enjoyed a bit of pampering this past week as he has decided to stay down at the house for the better part of the day (see photo).  So our keepers have been delivering his lunch to him, and scratching his head/neck/ears. After all the big old man deserves a little pampering.