Monitoring the Reintroduced Cheetahs in Bellebenno - The Journal

Monday 04th October. Day 34.
As the last mornings since it’s hotter during the day, the girls have already moved when we come at 6 am. I am quite sure that now they move earlier than before. At the beginning, we found them in the morning, at least close to the spot where we had let them the day before, whereas now they are pretty far away (a few kms), especially on days when we think they will hunt, like today. Or maybe they move during the night but they are not used to do this because of the captivity. 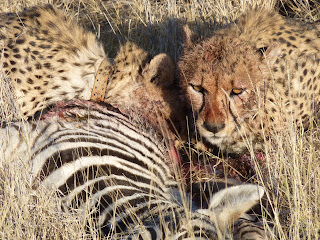 We manage to find them despite our malfunctioning equipment as they are still walking. Finally, at 8 :30 am they get a duiker after a chase that lasted less than 30 seconds. It was really impressive, even for James… Chanel got it and then Toblerone finished it. Like for the zebra they caught a few days ago (photo), Chanel seemed to teach to Toblerone how to kill…like a mum with a cub!
While they were eating, suddenly I heard lots of growling and all the Chocolates ran away from the carcass, obviously chased by Chanel. Then Toblerone came back a minute later and was allowed to eat. The rest, Hershey and Nestle, came back 20 minutes later, carefully, after watching from 50m away.  Chanel is obviously the dominant of the group. Toblerone seems to be dominant too but nevertheless under Chanel.
After eating the duiker in less than three hours, the girls rested all the day until the night.
Tuesday 05th October. Day 35. 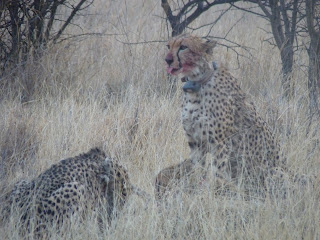 A pretty common day! They walk in the early morning, drink at Sukkel Dam (photo) and move in the open area between Dieckman’s fence and the first road in Bellebenno --not far away from the black gate, and then rest all the day, starting to walk again at the dusk.  I did observe a few things:
First of all, Toblerone is calling while the rest of the girls are resting under a tree. It’s not a usual call as when she vocalices for the others. Instead, it is a call between purring and chirping! After talking with Kate, one of the keepers, we realize that Toblerone could be in heat! Indeed, according to Kate, the hormonal treatment for castration is 7/8 months older and it is supposed to be effective only 6 months. Who knows, maybe we will have the chance to see a mating and in few months to have cubs! But if this happens, what about the coalition? Normally, for cheetahs, only the dominant females should be in heat (in this case Toblerone and Chanel, and we wonder whether Chanel’s behavior with the duiker was an expression of heat?). Nevertheless, according to Kate, Hershey and Nestle could be in heat one day. In this case, they would leave the coalition for 2-3 days.
Chanel’s scat is very soft and today we could see a worm in the sample we collected. After asking to the vet and the keepers, it appears that we will give to all of them some de-wormers. 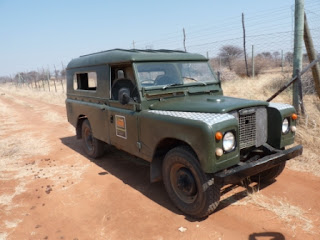 This week, because of car issues, we have the Mahindra, a car that the cats are obviously  not used to. Every time they hear this car, they sit or stand up, sometimes moving into the bush. So when we have to follow them on the road, we stay quite far away to avoid disturbing them too much.
Wednesday 06th October. Day 36. 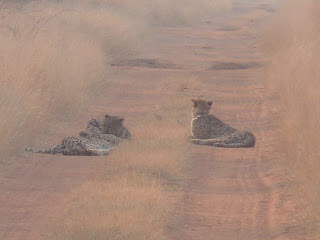 The first part of the day is really lazy! They stay on the same area as yesterday, starting resting at 8 :30! Like every day, they have some fun with some warthogs, chasing them to end up being chased by them. On the late afternoon, after setting up the «hair trap» for brown hyena, we find them walking on  the road between Sukkel dam and Kindergarten. We follow them on the road for one and a half hours and then leave them as the night comes, after 3 kms of walking!
Toblerone is still calling as yesterday but less often and lower.
Thursday 07th October. Day 37.
What a busy morning ! The busiest in a while! And moreover, in a «new area» (they have already been in the boundary of this region, but staying on the roads, not walking into and investigating the bush)! 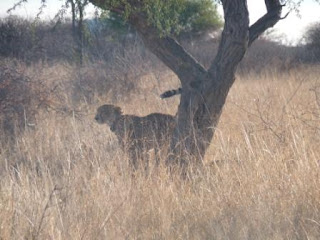 They walk about 5-6 kms in a really dense bush from 6 to 10 am. Maybe the densest in Bellebenno; so dense that it was hard to see and follow them 10m behind. In fact we lost them 2 or 3 times and were forced to use our equipment to find them again! This walk occurred between Kindergarten, the cattle fence and Dieckman’s fence. In this area, there is an old fence which cut the bush in two parts, except on the roads. Turns out that Nestle was alone on one side, while the others were on the other side. Nestle was calling, walking along the fence. Hershey was always walking on the other side close to the fence too, but not calling. Further from the fence and in the bush, Chanel and Toblerone were following slowly and answered to Nestle. Finally, after an hour, they managed to get back together, but when they met up, they did not groom or vocalize or even touch each other; they just kept walking! We noticed that Nestle was more aggressive toward us, growling if we were within 10-15 m –usually a normal distance. Then, they rested all the day under the shade of big bushes. Finally in the evening they came back to their «home range» in the open area, after a long walk (4 to 5 kms). Thanks to this walk, we have discovered a really nice and open area, like an oasis, with green big trees and sand (but without water).
So much walk in one day! They are probably hungry, looking for food, but they look fine, not too thin, not too tired… Unfortunately and surprisingly, we haven’t met any game during these walks ! The next meal will be enjoyed for sure!
Aymeric
Posted by Cheetah News at 7:34 pm