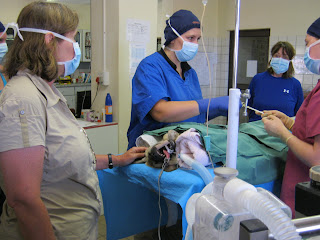 On the 13th and 14th of October the first puppy sterilizations took place at the CCF Clinic (photo left).
Tylee, one of our Anatolians, gave birth to these 5 puppies on 19th August 2010.  They were born at the kraal and introduced to young goats and sheep early on in their life. The puppies are now 8 weeks old and will soon go to their new homes as working dogs. 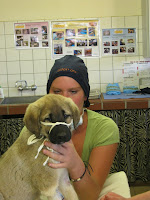 They will be brought to the clinic again next week to have their transponders placed and receive their first vaccinations.  The surgeries went well with Dr. Anais Herbert performing the operations and Rosie Glazier assisting her.  Many volunteers were happy to help preparing the little dogs for the procedure and to be an extra hand throughout the operation (photo - right: Sanna, a student intern from the Netherlands assisting with one of the puppies).  They recovered very well and were taken back to the kraal later in the evening.
The puppies will be placed at their respective farmers on the 23 October 2010 by our Livestock Guarding Dog Programme personnel.
Cheetah purrs to all,
The CCF Clinic staff.
Posted by Cheetah News at 8:29 pm