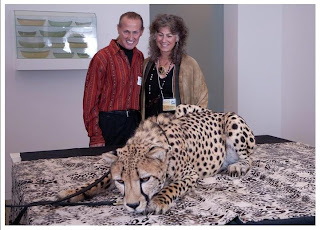 Ron Marks (pictured above with Laurie at the 2010 CCF DC Chapter fundraiser) and hiw wife Christy first visited CCF as Earth Watch volunteers in May 2007. Immediately upon their return to the DC area they joined the DC Chapter. Since then they have seen Dr. Marker during everyone of her visits to DC in the spring and the fall. They are active supporters of the CCF DC Chapter, especially during each Annual Silent Auction event. Ron has also helped out at the CCF office in Alexandria (Virginia), mainly with database entries.

Ron arrived at CCF on 4/5/11 as a long-term volunteer. He helps out in many areas. Thus far he has helped with the cheetahs, the dogs and game counts, as well as providing support with CCF's volunteer programme. According to Ron, his blog "was set up primarily to inform friends and family and whoever else wants to learn of my experiences and about what goes on at CCF. The reports are very generic and will not include any research type of information."

Learning about CCF through the impressions of our volunteers is always interesting, as it helps us to constantly make improvements to the volunteer experience. We hope you will enjoy reading Ron's blog, The Cheetah Field Report, which he plans to update on a weekly basis.