On the 15th of March 2011 CCF transported six of our captive cheetahs to Naua Naua Lodge on loan: two sets of brothers: Phil, Tony and Mischief, and Chuck, Geno and Crosby.

Many of you know Phil, Tony and Mischief. They came to CCF in July 2009 when a farmer called to say he had found a CCF tagged cheetah dead in his fence line wearing a satellite collar. The cheetah was known as AJU 1555 and CCF researchers had been analysing data from her collar during this period. By mapping her movements it was heavily suspected that she had recently given birth to cubs. Traps were set near where the mother was found and our researchers’ hunch was proven right. Phil, Tony and Mischief –with sister Polly, were soon caught and brought to CCF. Upon arrival they were estimated to be around three months old. Phil is the biggest of the three and likes to boss his brothers around, especially at feeding time! Mischief lives up to his name and often gets himself into trouble; he especially has an unhealthy ability to find snakes and has had to be treated numerous times after being spat at by spitting cobras. Tony should really have been named Houdini as he has scaled numerous fences at his time at CCF and been found in enclosures he shouldn’t be in! 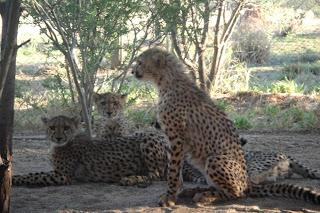 The other half of the Six are Chuck, Geno and Crosby, who arrived at CCF on the 12th of March 2010 and were estimated to be around 12 months old. They were trapped on a farm owned by Mount Etjo Safari Lodge after being seen without a mother and unsuccessfully hunting their game. The three cubs were kept in a large trap cage for a week in an attempt to catch the mother, but sadly she was never seen. CCF cheetah keeper Kate Echement named Geno and Crosby after the Pittsburgh Penguins Ice Hockey players Sidney Crosby and Evgeni ‘Geno’ Malkin. CCF cheetah keeper Matt Cleverley named Chuck after the action movie star Chuck Norris.

Crosby is the biggest of the three and the boldest; he is always the first to approach his keepers for food. Crosby and Geno are a little more shy and skittish. However, all three posses a very feisty display of hissing, spitting and paw slapping that have earned them the alias ‘wild boys’.

These two sets of brothers were introduced to each other in November 2010. Despite being together for several months before their move to Naua Naua, they had yet to form one tight coalition as they only appeared to socialise with each other around feeding time. Brothers Tony, Phil and Mischief are dominant over the other three; however, Crosby is growing in confidence and may be the cat to help bridge the divide between the two groups.

Exchaning or loaning animals with other locations for breeding and other purposes, allows us to care for and rehabilitate new arrivals. CCF has loaned cheetahs to Naua Naua since 2002, and they have played an important role by delighting visitors while educating them about the cheetah’s plight. In addition, the cats residing at Naua Naua participate in CCF’s cheetah genetics and health research.

The Naua Naua Lodge is located in the Outjo area, near Etosha National Park, and is perfectly adapted to nature. Due to its special location on a mountain slope, the lodge affords spectacular vistas across Africa's thorn-bush savannah and wildlife. Naua Naua has worked closely with CCF to help protect Africa’s most endangered cat.

Since the Six’s move to Naua Naua, the staff have informed us that all of them have settled in nicely at their new home and have been a huge hit with their guests who are lucky enough to meet them.