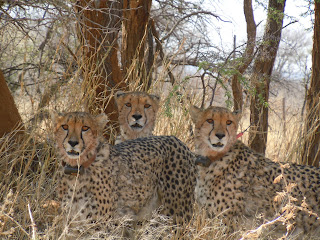 The New Year is almost upon us and when it does it will bring a new and very exciting chapter for Chanel and the Chocolates (photo). In January CCF’s most famous cheetahs will be moved to Erindi Nature Reserve. This means they will truly be free living cheetahs, with 70,000-ha of land to explore. This is the scenario we dreamed of when these four female cheetahs were first released into our Bellebenno game camp four months ago. You may well be asking yourselves how exactly do you transport four cheetahs living in a 4000-ha game camp to another location? Well, the first step is to move the cats back into their old home, the Bellebenno cheetah pens. Therefore this week CCF’s keepers, veterinary staff, selected volunteers and our Game Ranger James Slade went to Bellebenno to do just that. The task at hand was to find the girls through radio telemetry, anaesthetise them with a dart gun, place them in transport boxes and drive them back to the pens. If that sounds like a major operation then you would be right!

We aimed to dart all four cats at the same time but in the morning only Toblerone was successfully placed back in the pen from whence she came. In the afternoon however, thanks to James’ expert marksmanship with the dart gun, Chanel, Nestle and Hershey were taken to join Toblerone. This brought the Bellebenno release project to an end after 118 days and many successful kills!

With the cats now safely in a pen, when the day comes for the big move their keepers can easily usher them into a trap cage and then into the transport boxes. It will be a very exciting day and one all of us here at CCF are thoroughly looking forward to. We will of course let you know how it goes.

Happy New Year, and thanks so much to all CCF supporters for making this and other important projects possible!