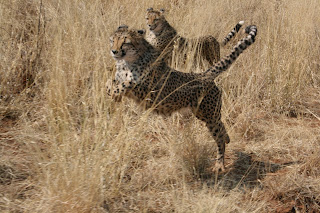 This past week a couple of our Bellebenno cheetahs have been entertaining our newest Earthwatch volunteers with some of their antics. Kayla, one of our younger females has taken to pestering the older cheetahs, spurring them on to run faster. One particular morning Luna had a double whammy of a moment running behind the feeding bakkie. With all the recent rains, tortoises have started coming out, including inside the cheetah pens! Luna was running behind the bakkie as usual, when Kayla gave her a playful double smack on the behind causing her to lunge forward straight into a passing tortoise! Poor Luna didn’t quite know how to react, and jumped what seemed like 5 feet straight in the air! Although we are all pretty sure that tortoise was just as surprised as she was! 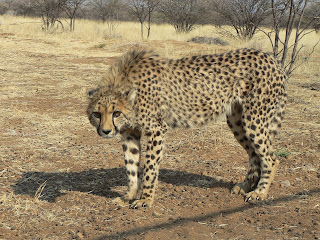 It is not just the Bellebenno cheetahs stealing the show, although they normally do that anyway. One of our 'scientists', Darwin (photo), appears to have been taking a note from Kayla’s harassment book. Darwin is the smallest of the Scientists, and has one of the biggest personalities as well. His victim is “Mr. Livingstone, I presume?” Livingstone and Darwin are the two smallest of the four and typically lag behind during the run. Darwin usually follows behind Livingstone, but apparently that is no longer good enough for Darwin as he has taken to playfully double smacking Livingstone’s hindquarters. At times it appears as if Darwin could almost jump up on Livingstone’s backside and ride him the rest of the feeding-run!

Also last week we received a call regarding a mother and two cubs on a farm just outside Kalkfeld (the neighbouring town to Otjiwarongo) suspected of catching small stock. The farmer is very conservation minded, and called CCF for assistance relocating this mother and cubs. CCF staff members Matti (senior ecologist), James (game ranger), and Kat (ecologist) assisted the farmer with trapping both cubs, but the mum was proving quite difficult. Over the next 3 days James and the farmer were in constant contact in regards to whether the mum was caught or still in the area. Unfortunately it appears the mum has abandoned the two cubs, and both cubs were brought back to CCF. The cubs are about 6 months' old and received a full health check up three days ago. Our friendly farmer is still trying to find the mum, and we are all hoping he succeeds.

Cheetah purrs to all, and please remember we have a challenge this month. Every donation until 31 December will be matched up to US$200,000, dollar for dollar, by a group of dedicated supporters. A cheetah sponsorship is a wonderful Holiday gift that keeps on giving for an entire year with two updates on the sponsored cheetah, as well as our Keeper updates on this blog.