On the 1st December 2010 the Clinic at CCF performed work ups on 2 wild cheetah cubs. The procedure was led by Dr Laurie Marker and Dr Anais Herbet. Rosie Glazier and many other staff and volunteers were also involved. Current Earthwatch volunteers were able to take part and have a hands-on experience. 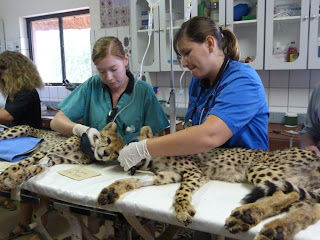 The two cubs, one male and one female are around 6 months of age. They were caught in a trap cage by a farmer in the Otjiwarongo region. The mother was unfortunately not caught after several attempts. It is believed that she abandoned the cubs. The anaesthesia went smoothly allowing the team to gain important data and samples; and to be able to assess the health of the young cubs. Both are in very good condition with only a few superficial wounds from the cage. Vaccinations and de-wormers were given and transponders placed. They recovered well and are currently held in a secure quarantine pen close to the centre.

Remember, this is one of many examples of what your donations accomplish. Please remember to include the cheetah in your gift list this December, and every dollar will be doubled as part of our year-end challenge!

The CCF Clinic Staff
Posted by Cheetah News at 10:06 pm