Our Ecology team has had a pretty busy past couple of weeks with back-to-back Earthwatch teams here at CCF. As always we were fortunate to have some really terrific groups of volunteers, they have been a great help in so many facets of our research. We have had some rain over the past few weeks and are seeing everything transform and turn green including our dams (many of which were long dry) refilling with water. With the coming of the rains, we are seeing lots of interesting insects, reptiles, amphibians and birds starting to appear. 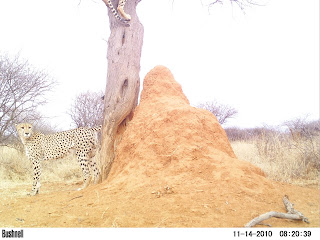 Everything is going well with our camera traps. We recently got our first cheetah on a camera trap on our Farm Bynadaar as well as our first photos from Osonanga. We have also been getting lots of photos of HiFi, the two wild males that live in Bellebenno (photo left), the mother and 4 cubs, and potentially a new female on the big field. As always, we get a variety of interesting photos of other animals through our camera traps.

All four female cheetahs participating in the Bellebenno re-introduction research are doing fine. We are following them a little less intensively now, checking on them early mornings and also in the evenings (as these are the times they are most active). With Ryan and Aymeric sadly having come to the end of their internships (they will be very much missed), James, Matt and Kate are now taking the lead on checking on the cats. Matti and I have been analysing some of the their movement data; throughout their released period they have managed to move around almost the entire area of the Bellebenno camp and are moving on average about 3.5 km a day, mainly in the early hours of the morning and early evening.

We have seen HiFi around the centre a few times in the past week or so. We will be setting a trap to try and catch him to change his collar in the next few days.

As part of CCF's Biodiveristy Project, we have finished the 3 months of monitoring the harvested and non-harvested plots. We are now busy sorting through camera trap photos and hope to begin analysis soon.

We are continuing to check the fence line daily and recording new and reopened holes. With the recent rains, some of ground has softened up making it easier for a few more holes to be made underneath the fence. It does, however, still seem that most of hole-digging animals (warthogs and porcupines) are using the swing gates!

With Earthwatch here the past two weeks we have been trying to do all our monthly game counts. Unfortunately, we have had a hard time with a few of the counts being rained out last week, however, we have had much better weather this week. This Earthwatch group has had phenomenal luck on some of the counts, like seeing six cheetahs on one night count, a spectacular sighting of an aardwolf on the next and then a great sighting of a leopard on a late afternoon count. Following the rains, the big field is alive with animals and we are seeing bigger herds of oryx, springbok and red hartebeest (with lots of little red hartebeest frolicking around as well).

Unfortunately, we have had to said goodbye, or are about to, to a lot of our interns. Ryan and Aymeric have already left and Sanne, Brett and Henry will be leaving next week. Sanne has worked incredibly hard throughout her time here and has made a lot of progress with our project looking at the diet of the free-ranging Namibian cheetah through analysis of hairs in scat samples. Brett has worked hard on analysing some data from our monthly waterhole counts as well as spending a lot of his time helping Aletris out with her caracal project. Henry has been very involved with the care of puppies and goats as well as helping sort through camera trap photos. Recently he has also been helping James with the removal of the invasive prickly pear from around cheetah pens. Our new intern from the van Hall Larenstien University in the Netherlands, Marjolein, has arrived and is settling in well. She will be working on a project looking at the use camera trap photos of non-target animals to estimate species richness and density.

Happy Holidays to everyone, and please don't forget we have a Challenge through the 31 December. Remember that your donation will make an enormous difference not only to the cheetah but to its entire eco-system!