A good thought for Chewbaaka, please.

The last couple days have been like a bizarre movie that now one could actually make up. I headed off on Wednesday with the International Course and the Wild SOS film crew to go to Etosha and to interview a farmer. 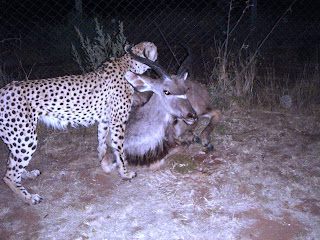 Bruce called me as I was travelling and told me that in the middle of the night a rabid kudu jumped into Chewbaaka’s pen. He heard lots of noise from all the other cheetahs around – growling and hissing. He went out into the yard and there was a big bull kudu with foam at its mouth and going in circles in the pen – this is the fourth kudu in our housing area in the past month.

Kudu rabies began around 1978 and in the drought of the 1980’s it killed off nearly 80% of the country's kudu. Its believed to be transmitted by a rabid jackal biting a kudu. The kudus, which are browsers, eat the thorn bushes and get cuts in the inside of their mouths. Then their behaviour is to lick each other and put their tongues in the inside of another kudu’s mouth. So, it is believe that the rabies is transmitted orally. Well, we have been dealing with kudu rabies for the past several years, as the epidemic is moving through the country. We are at an all-time high right now throughout.

Well, poor Bruce, he was hoping of a quiet night and the kudu incident happened. As he got out into the yard, he found Chewbaaka panting in an exhausted heap. Bruce was able to encourage Chewbaaka into another yard and then had to shoot the kudu so it could be taken to the state vet the next morning to confirm rabies.

I got home later in the day to find poor Chewbaaka very, very sore and not able to walk well. Oh my! Bruce and I monitored him all day today and this evening found that he has an oozing under his rear legs. He was licking and again and was very, very weak, stiff, sore and dehydrated. 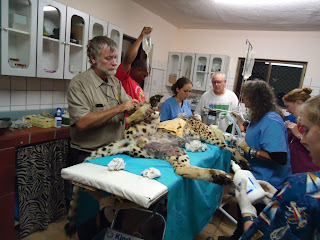 Well, we had no choice but to anaesthetise him this evening – a big decision due this age and his renal history over this past year. We got him to the clinic and began looking for what injuries he may have. He was full of fly maggots, and what we found I have never seen nor I would think that anyone would have ever seen: he is bruised in his entire stomach area and the inner thighs of his rear legs. We had to shave all the hair to clean and see if there were any puncture wounds. We found none. However, the bruising is so bad that he has hematomas throughout his stomach. They are weepy, like if you get a rug burn, so, somehow whatever took place between him and the kudu, his stomach took a huge beating.

We are worried about internal damage, however, all his vitals look OK. But, we are not able to say that he's is out of the woods on this one. We worked on him from 7pm until 9:30. Right now he is down on his bed, covered with blankets and hot water bottles. We are trying to stabilise his temperature and hope that the anesthesia will wear off OK. Needless to say, this has been quite stressful.

On to other topics, Cheetah Keeper Matt reported that Cleo did not come to the truck in Bellebenno for her food. So for the past two days we have had a search group out in the 200-acre camp looking for her...she's just is not there. We will keep you posted on this one. Cheetahs at CCF just don’t vanish. Perhaps she found a hole in the fence that no one else has found --cheetahs or people. 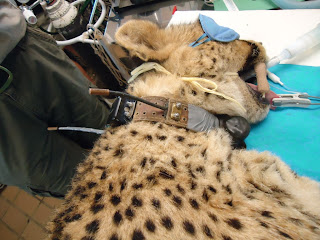 As I reported before, on Monday we worked on the wild female cheetah that had to go to the dentist and have a tooth extracted. Her collar is on and ready to go. We put her back with her two 2-year old sons and this morning opened the gates of their enclosure for a soft release. We set camera traps and will know when she and sons, who had been put with another young male (also about 2), as well as two wild females cheetahs that have been with us for several months growing big enough to go out into the wild. The whole family team will go out, hopefully tonight. 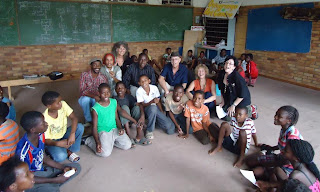 If all of this wasn't enough, two of our volunteers, Laurie from Sacramento, and Jean from Vermont – both artists, went into Otjiwarongo today to work with the art school. I went in later in the day to meet the kids who were coming to help draw cheetahs. Laurie brought a lot of donated art supplies to the art school. We had 40 students from 6 schools! Laurie and Jean will do more over the next week and next week we will go in to get their final drawings so Laurie will take them back to the US and do a fund raiser with them for us.

In the middle of all of this, it's pouring cats and dogs --lighting and thundering right above us. This is such a bizarre time. The rain is unbelievable. Simon Cowell from Wildlife SOS (UK) and his film crew have been here for the last few days.I'm sure they didn't expect all this happening! 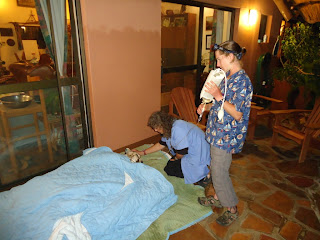 OK – that’s what’s new here. Chewbaaka is just outside sleeping in his bed and Bruce is with him. We certainly hope that we can reduce his pain and help him. This was more than a traumatic experience for all of us.

Laurie
Posted by Cheetah News at 3:04 am