Last Saturday, 30 July, marked the 17th Annual Waterberg Conservancy Waterhole Count. This conservancy-wide count provides population and density estimates and trends for various game species throughout the Waterberg Conservancy farms. Through continued regular monitoring of wildlife populations utilising the Conservancy lands, more effective conservation of game species will be possible. Since the beginning of these counts in 1995, we have seen increases in most games species across the Conservancy farms.
Here at CCF we counted 25 waterholes across seven farms from 6am to 6pm. This year we had 50 participants helping with the counts, including 22 teachers from Miami University Ohio's Earth Expeditions, 16 students from Mesa Community College Arizona, 10 school kids from the Otjiwarongo Arts Centre, and CCF interns. 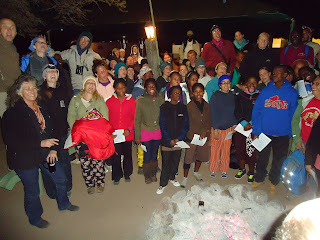 After an early morning, breakfast at 4:30 am, participants were driven out to their hides to start counting at 6am. They braved the cold and windy weather and finished the day in high spirits with a big smiles on their faces. For some of the participants from Otjiwarongo, this was their first opportunity to see a lot of these species in the flesh. In addition to baboons, giraffes, zebras and elands, highlights of the day included two different sightings of leopard and a sighting of one of black rhino. 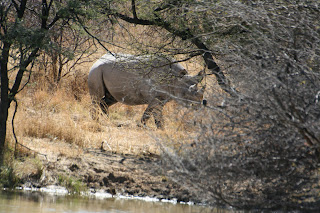 Above: One of CCF's black rhinos sighted during the 12-hour waterhole count. Below: One of two leopard sightings. 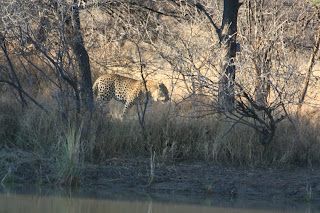 This week we continue our annual game counts with transect counts across all our farms. We will drive over 300 km counting game on CCF property. We will keep you updated with any exciting results.

In other news, our resident wild cheetah HiFi made an oryx kill right by one of the cheetah pens near Lightfoot camp. One of CCF's interns found the kill in the morning, and photos from our camera trap a few hundred meters away captured HiFi, bloody faced and full bellied early that morning, confirming it was indeed him.

Cheetah greetings to all,