B is for brown hyena 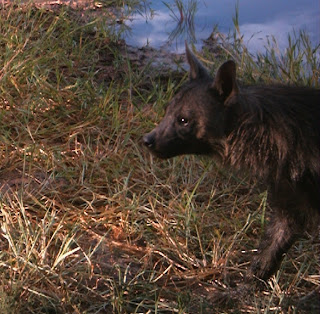 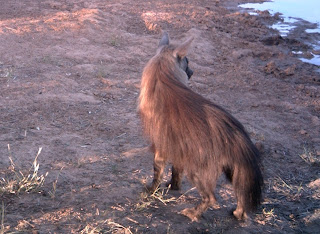 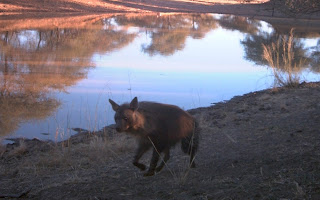 CCF has carried out a number of camera trapping surveys, and also maintains a network of cameras positioned for ongoing monitoring of the wildlife on our land.  While we are mainly focussed on cheetahs, there are many other species out there, and the cameras will trigger no matter what passes them by.  In this series of weekly blog entries, I will use these pictures to illustrate some of the wealth of animal life in Namibia - one species per week.  I hope you will enjoy seeing a little more of our world here in the bush.

Although there are far more than 26 species to be discussed, I thought I'd continue the alphabetical scheme for the time being, and talk this week about the shy, and oft misunderstood, brown hyena.  With a sharply sloping back, large pointed ears, and a long, lush brown coat, these animals are both distinctive and handsome. Unique to southern Africa, they are almost entirely nocturnal and very rarely seen by visitors to the region.  Listed as "Near Threatened" by the IUCN, estimates place their current numbers at between 5,000-8,000 and decreasing.

The brown hyena (Hyaena brunnea) weighs about 50kg (110lbs) and stands 80cm (31") at the shoulder.  While many people believe that they prey extensively on livestock, leading inevitably to their being hunted, poisoned, and trapped, their main diet is actually bird's eggs, small mammals, insects and fruit.  Along the Namibian coast, they also sometimes feed on seal pups.

Hunting primarily at night, they tend to spend their days in former Aardvark burrows or hidden within rocky hillsides.  Brown hyenas are intensely social animals, with family groups living together and controlling territory between them, although each individual tends to hunt alone.

There appears to be a large and healthy population here at CCF, but although they are one of the most commonly seen carnivore on our cameras, very few people have seen them in person.