Harry goes to the dentist! 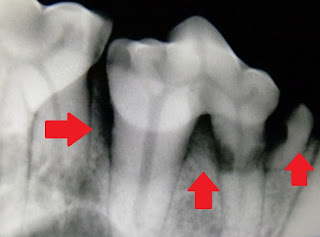 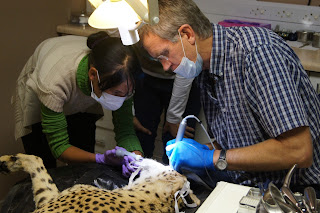 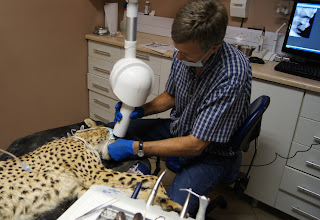 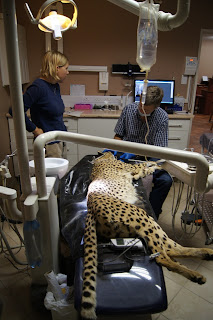 On the 4th of July 2012, Harry the cheetah went to see Dr. Profitt, the human dentist in Otjiwarongo who helps take care of the teeth of all of CCF’s cheetahs.  Harry is a seven year old female and is one of the Hogwarts Trio of captive cheetahs at CCF, along with her sister Hermione and her brother Ron.

During her annual wellness exam in April of this year, it was discovered that Harry had two teeth affected by gum recession and infection under the gingival.  She was taken to the dentist to have radiographs taken of the affected teeth and to determine the appropriate course of treatment.  Her left upper third premolar was found to be affected by bone loss surrounding the tooth and root resorption secondary to infection; it was elected to remove that tooth as nothing could be done to save it with the advanced periodontal disease.  Her right upper third premolar was affected by a similar condition but it was much less severe.

Fortunately the tooth on the right side was not suffering from advanced periodontal disease and so instead of having to be removed that tooth was cleaned and dental antibiotic gel was instilled between the gingival (gums) and the roots to help prevent future infection.  The remainder of her teeth all looked good and healthy.

After her procedure, Harry will receive several days of oral antibiotics, and of course she also received pain medication.  The day after the procedure she was looking good as if nothing had happened to her, and she even participated in a cheetah run!

3.       Harry having digital dental radiographs taken of her tooth