A BEAUTYful Success Story from our Livestock Guarding Dog Programme 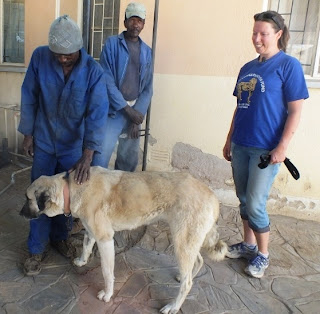 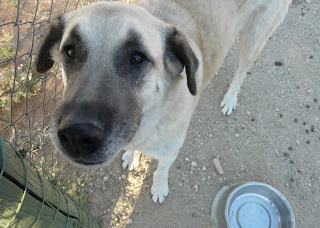 Earlier last month we received a call from a farmer concerning one of our livestock guarding dogs. He has been a wonderful owner of our dogs since 1999 and, in 2010, he gave a good home to one of our dogs, Beauty, after she was removed from her previous home due to lack of care. Following the death from old age of their first dog (funnily enough called ‘Cheetah’), the farmer received another puppy from us in April of this year. The farmer asked if we could find another home for Beauty, as she wasn't working well with his herder, so that she could continue to do the job she was raised for.

When she arrived at CCF, she was anaesthetised to get a good look at her teeth and take some x-rays of her joints to check for injury and the onset of arthritis. She had a few tooth problems, so lots of roots were removed on one side, but the x-rays showed no other issues.

After almost two weeks at CCF, Beauty was finally ready to go to her new home in the pretty region of Outjo.   The journey began early in the morning with a sedative to keep her calm during the long journey ahead. It quickly took effect and she was loaded into the truck for what we hope is her final car journey.  After the initial shock of the sedative taking effect, Beauty relaxed and took the rest of the trip very calmly indeed.

Upon reaching her new home, she needed a bit of help as her legs were still feeling rather wobbly from the sedative, but she quickly introduced herself to her new family with her tail wagging! They were thrilled to meet her and she was shown a great deal of affection.  The farm worker remarked that Beauty was definitely the right name for her!

We have checked up on her since her re-homing and everyone is really very happy with her. She is very good with the livestock that she is there to protect and is doing a great job.  Another success story for our Livestock Guarding Dog Programme!