C is for Caracal 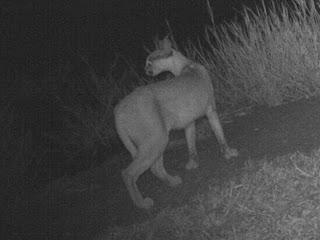 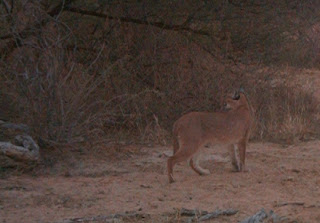 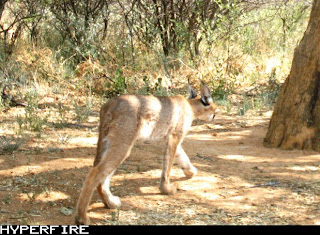 CCF has carried out a number of camera trapping surveys, and also maintains a network of cameras positioned for ongoing monitoring of the wildlife on our land.  While we are mainly focused on cheetahs, there are many other species out there, and the cameras will trigger no matter what passes them by.  In this series of weekly blog entries, I will use these pictures to illustrate some of the wealth of animal life in Namibia - one species per week.  I hope you will enjoy seeing a little more of our world here in the bush.

This week’s entry is of a smaller felid species, the illusive caracal.  The taxonomic classification of this tawny-red cat has been historically disputed, being grouped either in the Lynx genus with European and Canadian lynx or the Felis genus, along with domestic and African wild cats.  However, recent molecular testing has shown it to be monophyletic, i.e. in its own taxonomic group, Caracal.  This is much like the cheetah, (also a “C” animal spotted on our camera traps!), which is also in its own group, Acinonyx.

Approximately three times the size of a domestic cat, a short stubby tail that looks like half may have been cut off, and tufted ears like that of a lynx, this carnivore is present across much of sub-Saharan Africa, ranging into the Middle East and as far east as northern India.  As an adaptable meso-predator, the IUCN list this cat as of “Least Concern”, although we do not actually know the exact population numbers worldwide.  It is thought with the reduction in large carnivores such as leopard and lion, this has left a niche for caracal to expand their range in these areas.

Caracals (Caracal caracal) weighs between 6-19 kg and stands 30-50 cm at the shoulder.  A very rare melanistic (black) caracal has been noted in the wild, but only a couple of sightings have been confirmed.  With tremendous speed and agility, the caracal can leap 3 metres vertically, catching birds mid-flight.  Common prey of caracals are game birds, which unfortunately can lead to human-wildlife conflict on chicken and fowl farms. Because of this conflict, caracals are extensively trapped, poisoned and shot, particularly in southern Africa.  However, effective livestock husbandry can almost eliminate this depredation, including locking chickens up at night into coops and having livestock guarding dogs present.

Caracals are solitary hunters with relatively large home ranges (up to 316 sq km) in arid habitats of up to 2,500 m in elevation.  They exhibit a range of vocal calls, ranging from miaows to coughing calls.  Females can give birth to six kittens, although a total of three is more common.  The young then stay with their mother for 9-10 months before becoming independent.  They can live up to 16 years in captivity, but no published studies have confirmed their longevity in the wild.

We are unsure of the population density of caracals on CCF property as they are very shy animals, extremely rarely seen in person, and not often photographed with our camera traps.  Further studies on caracals, as with other smaller predators, are essential for effective conservation planning.

Stay tuned next week for another camera trap animal blog!