It’s been a short day, as a lack of vehicles inhibited me from getting out again this afternoon. No matter though, as I got lots of info this morning for us.

To start with, I went out to look for Shanti this morning after seeing no signs of our new friend, the resident Leopard. I tracked her from the same place I did yesterday and her signal was even stronger than normal, so, I went after her thinking she might be down on the plains or at least travelling in a river bed closer by. Either the signal was bouncing across mountains or she saw us and ran, the latter being the more probable. We walked and walked up and down hills until Paul and I were in the middle of the mountains dividing the Draaihoek and Moringa Valley areas. Here, the signal completely disappeared and even though we searched high and low for it, couldn’t pick it up again. By this time, we were pretty exhausted and on top of my coffee deficiency by this point, poor Paul was suffering with a mooi babelaas after his 21st birthday yesterday… We turned back to make another plan.

On the way back, I wanted to check on the wounded Oryx and seen if she was still around. As we slowly approached, the young calf ran from one bush to hide behind another, obviously shaken by our approach. This was unusual, because before it hasn’t been that bothered by us at all. Then we saw the tracks and the drag marks. The Leopard must have got her sometime last night and even though she was massive (she hadn’t been walking for awhile yet was still feeding regularly...) the Leopard had managed to drag her over 100m and was guarding his prize under a large bush. This is Nature’s way and although it’s easy to feel sorry for the calf, this is how things work. We left the obviously irritated Leopard in peace, and I’m just glad he did manage to eat as we had just walked past him (at a distance of course) to try and find Shanti… 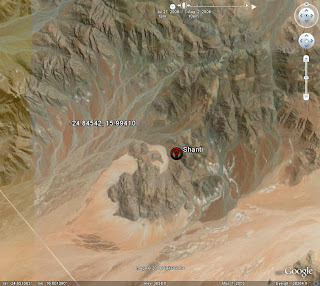 I noticed on the map that Shanti may have used an old path to head into Moringa Valley and decided to drive around and see if I could catch up with her on the other side. Before I went, I took a quick look to see how the 5 males were doing and it looked as if they had wandered off into the Keerweder pan, probably on a hunting trip. Sure enough, they were across the main road and in the process stalking a pair of Zebra, much to the pleasure of a German man and his son who had been passing through at the right time. They were very respectful of the Cheetahs, remaining quiet and not getting out of their car to take picture so, I filled them in on the details of the project and we watched in amusement as they walked up to the two fully-grown Zebra. Suddenly, a young foal exploded from the grass in front of them, obviously the real attention of the boys. They took off after it, Kia in front with Lindt hot on his heels. All the Zebra had bolted but, turning on a dime, the two parents stopped to confront the Cheetahs. They may not always show signs of intelligence but I’m glad they did here and they decided to abandon the chase. They wandered out further into the pan, two very excited Germans continued their journey and I was off to Moringa Valley. The Zebras continued to eat the grass around them.

Shanti has definitely come out on the other side of the pass and although I probably could have found her, she was still up in the hills a little ways and the last thing I wanted to do was chase her back over the Mountains again. As I was trying to decide if I would walk any further, I had my mind made up for me when I realised I need to turn back as the Land Cruiser was needed by Mike and Ann this afternoon. I left her in peace again but the area she is in now is perfect. Nice and open with a lot of game. Plus, this area hasn’t seen any known Cheetah activity yet so, it may prove to be an easier hunting ground for her. Time will tell.

That’s all for today. I’m sorry there wasn’t more but I can’t hog the trucks all the time!

PS The photo of Shanti was taken by Rob Thomson at the CCF grounds prior to her release at NamibRand.