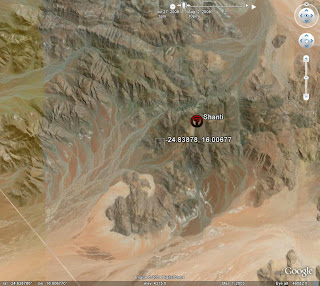 It seems like we may a have a slight problem with Shanti. Her position now is a critical one. I strongly believe that she is somewhere up in the mountains on the border of the Reserve. If so, she has two paths: one back into the Reserve of tough, high hills or, an easier one down through the valley on to farmland. And I think it’s the farm where our boys weren’t too welcome.

The boys seem well though, and I think they’ve managed to catch some smaller game again, possibly a young Springbok. I looked for a kill site but couldn’t find anything. It’s interesting to see that when they don’t kill something large, it looks like there is a hierarchical order as to who gets the most food. It’s just speculation but every time they come back full, but not too full, it’s easy to see that Lindt, Cadbury and Kia have usually eaten a lot, while Mushara looks a little bit less full and Ra appears to have had the least. He’s still eaten, but not nearly as much. I don’t think their digestion would be all that different, so who knows? It’s something I’d like to look at more in depth for sure.

Also, after coming back from tracking Shanti, I was rewarded with a sighting of a female leopard and her cub near a place called “Cheetah Rocks”. Thanks to Jeff from SDL for the tip-off! She looked very healthy and most definitely the one whose tracks we spotted the other day around here. I guess the really do come down out of the hills this time of the year. They disappeared too quickly for pictures unfortunately but maybe I’ll come across them again.

I’ll be in touch as soon as I learn more about Shanti but she’s in a very undesirable place at the moment. We’ll just have to see what we can do.