Clearing bush to help cheetahs, people and the environment! 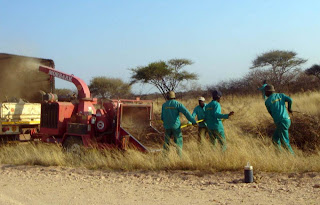 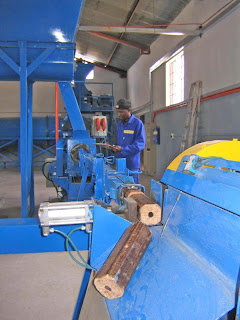 CCF’s activities are not just limited to cheetahs and their research and reintroduction, but also include environmental restoration and livelihood development. CCF’s region is known for a high density of cheetahs but is also infested with native-species thornbush, known as encroachment, and the problem is staggering when you travel the region: more than 26 million hectares are encroached with between 2,000 to 10,000 kg of bush per hectare.

Due to overgrazing, wildfire suppression, and reduction in natural grazers, commercial farmland in north-central Namibia is encroached by several thornbush species: Acacia mellifera, Acacia reficiens, and Dichrostachys cinerea, with relative densities depending on soils and rainfall. Bush encroachment is exacerbated further by overgrazing, which decreases farm value. The problem has been recognized by the Namibian government and there are several initiatives to find cost-effective land restoration methods.

The invasive thornbush species are dense hardwood with a heating value similar to coal. They burn cleanly with little smoke – perfect for campfires and cooking, or power generation on an industrial scale. If a business can successfully utilise this energy it becomes a triple bottom line corporation: land restoration, job creation and business profitability.

CCF Bush (pty) Ltd is the entity responsible for research and demonstration of this business. Thornbush on CCF land is harvested, chipped and transported to a factory, where it is compressed into wood briquettes. The product, “Bushblok,” is aimed at the braai (barbecuing) market as there are no chemicals or additives and it burns cleanly with high heat. It is differentiated from firewood by being denser, drier and more consistent.

To maintain social and environmental standards, CCF Bush is certified by the Forest Stewardship Council’s principles for responsible harvesting. The criteria are similar to Fair Trade and include ensuring indigenous rights, maintaining pollution controls and compliance with domestic and international labour laws. We are proud to say our product is FSC 100% from well-managed forests!

At the current scale of operations, more than 30 Namibians are employed in skilled and semi-skilled positions. The amount of bush on CCF land guarantees a decades-long harvest schedule before needing to return and harvest an area again. Different harvest techniques and machinery are being trialled for various combinations of capital, rate of harvesting, and job creation.

To encourage other uses of encroaching bush, research on harvesting and production is made available to those interested in utilising Namibian biomass. Existing initiatives include DRFN’s CBEND project <<http://www.drfn.org.na/projects/energy/cbend/>> of powering an electric generator and a cement manufacturer co-firing their furnace with coal and bush. Other industries continue to explore the feasibility of biomass fuel.

CCF Bush is a direct conservation connection to the cheetah: predators struggle to hunt in dense thornbush and risk severe eye damage when chasing prey. When the savannah is restored to the natural habitat, the predators can resume their natural hunting style. By encouraging and supporting bush clearing initiatives, CCF Bush contributes to cheetah conservation in Namibia.

You can read more about the Bushblok history and factory here http://bushblok.com/