Volunteering as an Earthwatch volunteer 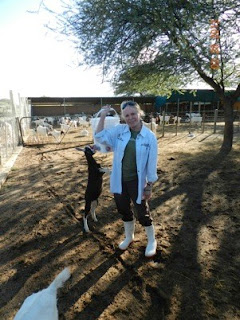 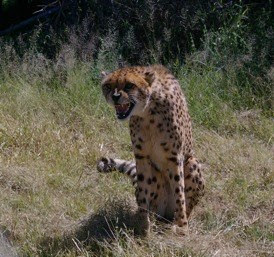 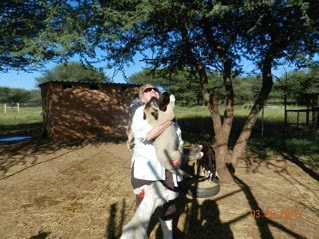 The personal blog of an Earthwatch volunteer, Susan Howard, from the USA

In March of this year, my friend Arta and I flew to Namibia for two weeks to work on the Cheetah Conservation Fund's farm. Cheetahs in Namibia share the land with ranchers and cheetah are a threat to their livestock. The Fund tries to help farmers find ways to reduce conflict with the cheetah and raises Anatolian livestock guarding dogs that they give to assist farmers in protecting their livestock. The Fund will house those cheetah that are no longer able to survive in the wild.

As a result, there are 51 cheetah living on the Fund's property. Some are wild and are not very interested in seeing humans at all and hopefully will one day be released back into the wild, while others have been brought to there as very young cats and have no skills in hunting or defending themselves, and are therefore permanent residents used for educational purposes.

So what did we do while there? The most fun job was to help feed the 51 resident cheetah housed in various parts of this very large property. In the morning, the truck was loaded with meat and we would make our way to the various enclosures. For the very wild cheetahs, we would throw the meat over the fence to waiting cheetahs who would take the meat and run off to some secluded spot to eat. Others were fed in bowls in two part enclosures to allow us to place the meat and then allow the cheetah to enter the enclosure. Some would even hiss at us!

Another job included feeding and looking after the livestock guarding dog puppies. While we were there, there were eight puppies at about 8-weeks-old and already they were huge!  If dogs are going to protect goats, they have to be around them from an early age. So another job was to look after and feed goats, especially baby goats. This was a really fun thing to do!

CCF also does a lot of research, from habitat studies for wild cheetahs to analysing physical and medical cheetah records. All of this has to be entered into the computer. So data entry was also part of the work. Not my favourite but someone has to do it!  It was very interesting learning about all these aspects of CCF that help to save the wild cheetah.

All the best, Susan