A is for Aardvark 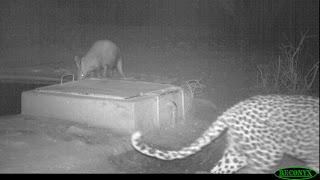 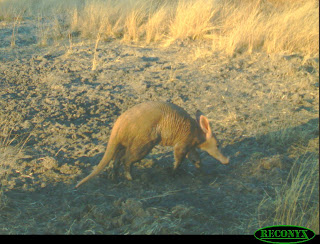 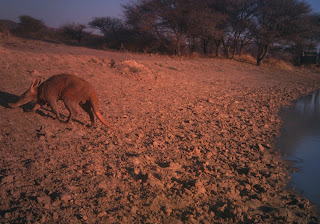 CCF has carried out a number of camera trapping surveys throughout the years, and also maintains a network of cameras positioned for ongoing monitoring of the wildlife on our land. While we are generally focusing the carnivores that pass by, there are many other species out there, and the
cameras will trigger no matter what passes them by. In this series of weekly blog entries, I will use these pictures to illustrate some of the wealth of animal life in Namibia - one species per week. I hope you will enjoy seeing a little more of our world here in the bush.

For my first entry, I thought I should start at the very beginning of the alphabet, with the extremely distinctive Aardvark. A high-arching spine, big ears, and a long snout make this animal impossible to mistake. The aardvark lives throughout sub-Saharan Africa, and though rarely seen, is not
considered endangered. The IUCN lists their status as "Least Concern", but does go on to admit that not enough is known to be sure whether the population is decreasing or not.

Aardvarks are mammals of the Orycteropodidae family. They weigh up to 68 kg and reach 60 cm at the shoulder. They feed almost exclusively on ants and termites (hence their pseudonym "antbear"), using their strong front claws to either dig underground, or break into protruding termite mounds.

They also dig burrows in which to sleep during the day, an activity which often brings them into conflict with humans as these burrows often occur along roads, resulting in hazardous potholes. Once dug however, these same burrows are usually taken over by other animals including snakes, jackals, porcupines, hyenas and warthogs.

Here at CCF, a surprising number of staff and volunteers have caught sight of an aardvark while driving at night, although they are still most commonly seen only on our camera traps.

Stay tuned for another animal next week!