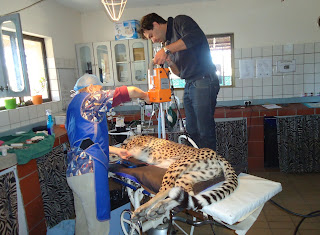 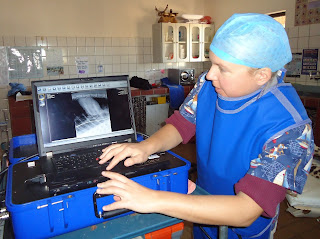 On 13th June 2012 in the morning, Tiger Lily, one of the four OK Ambassador Cheetahs at CCF, was anesthetised for several medical and surgical procedures.  For regular readers of our blog, you may already know that in April of this year, when Tiger Lily underwent her first annual wellness exam, a growth was surgically removed from the inside of the wrist on the right front leg.  This growth was sent to a veterinary pathology laboratory in Johannesburg, South Africa, and was diagnosed as a mast cell tumour.  Mast cell tumours are generally considered benign in cats, which is quite different to the situation with domestic dogs where they are often a very aggressive, malignant type of cancer.  Fortunately Tiger Lily’s tumour was diagnosed as benign.

In late May, a small growth about the size of a pea was noted in the same location where the tumour had been removed in April.  Unfortunately it seemed that the growth was coming back, possibly because it was not completely removed the first time.  As is the case with most types of cancerous growths, there can be microscopic extension of tumour cells beyond just the mass itself.  Also, this tumour was located in a spot where there is not a lot of “extra” tissue to remove, and there are many important ligaments, tendons, and blood vessels.

Two veterinary oncologists (cancer specialists) were consulted, one in South Africa and one in the United States.  A plan was developed to perform another surgery to remove the tumour a second time and also to evaluate for its potential spread.  The second surgery went very well, and this time the mass was smaller and easier to remove.  She also had radiographs taken of her chest and abdomen, and everything looked normal.  Finally, she had an ultrasound exam of her abdomen, and a small nodule was identified in the spleen.  This nodule could represent a benign aggregation of cells within the spleen and be unrelated to the tumour on her front leg, but there is a small chance it could represent spread (metastasis) of the tumour to the spleen.  A sample was taken of the nodule using a very small needle, guided by the ultrasound.  The mass and the cells from the spleen will be sent to the pathologist in South Africa for evaluation.   We are hopeful and optimistic that all the samples will come back as benign.

After her procedures were finished, “Tiger” was taken back to Dr. Laurie Marker’s house for recovery, where she was watched closely by several student interns and Dr. Marker herself.  She recovered uneventfully and was up and walking around within a few hours of the procedure.  Today, just two days later, she and her three siblings are racing around and playing as if nothing ever happened.  Tiger Lily will take antibiotics for a week to prevent infection of the surgery site, and she is also taking a pain medication.

Both the radiographs and the ultrasound could not have been performed if it were not for the gracious generosity of Mr. Mark Cater, a friend of CCF’s in the UK, who donated both the ultrasound and the x-ray machine to the CCF clinic within the last 18 months.  We are extremely grateful for these kind of generous donations to assist with the health and welfare of both captive and wild cheetahs.