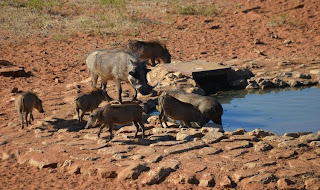 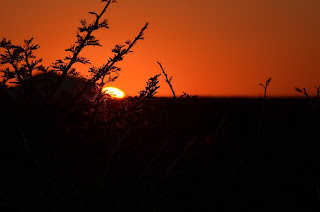 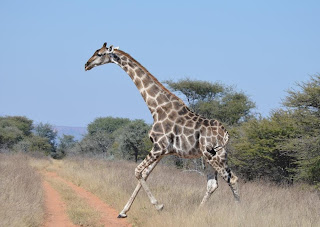 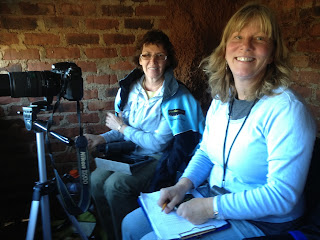 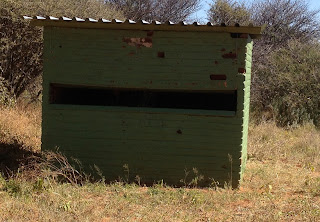 For those of you who have been following our blog for some time, you will have already heard of our huge soft release farm, Bellebenno, which is just short of 4,000 hectares.  Cheetahs that are considered candidates for reintroduction to the wild are radio collared and released here to see how well they would do on their own.  Can they kill and find water to sustain themselves?

The area has a variety of wildlife, some suitable for cheetah food, others not.  The ecology department is responsible for monitoring the wildlife in this area to determine trends in populations due to predation, migration, death and disease.  We want to know firstly if there is enough game in this area to feed the cheetahs we release and secondly if the cheetahs are causing a detrimental effect on prey populations.  As an Earthwatch Volunteer, one of my tasks in my two-week period was to help in this monitoring.  There are four well-spaced waterholes in Bellebenno with hides for people to sit in and observe the wildlife.  I had the marvellously wonderful experience of spending a 12-hour day, 6am to 6pm, at one of these waterholes recording all the animals I saw.

We were sat in a brick hide, complete with a slit for viewing, about 15-20 m from the waterhole itself.  Every time animals appeared, whether it was the ubiquitous guinea fowl, the abundant but charismatic warthog, or the bigger game animals, my response was always, wow, Wow, WOW…  We were so close and got the chance to take some great photos of these animals going about their daily tasks.  It was a fantastic way to observe these animals and their natural behaviour at close range.

Our count for the day included 45 guinea fowl, 72 (!) warthogs, a couple of large herds of zebra, 28 oryx with their beautiful painted faces, a mother giraffe with her cute young and 21 huge eland.  Then, as we were closing down for the day and the sun started to set in front of us, another enormous eland appeared with two little steenbok, the latter of whom could have walked beneath the eland’s belly with room to spare as the size difference between these two antelope species was shocking!   As the sun vanished beyond the horizon, I realised that this was a day to treasure always with such fascinating wildlife almost close enough to touch.

If you would like to volunteer in an Eathwatch Expedition to Cheetah Conservation Fund please follow this link http://www.earthwatch.org/exped/marker.html